Yankees Would be Wise to Pursue Michael Morse 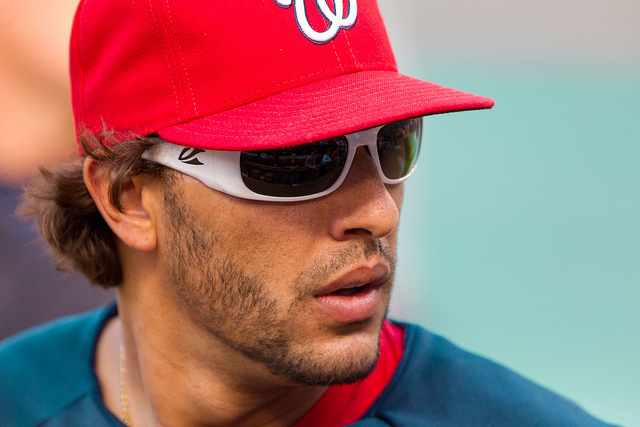 The Washington Nationals completed a trade to acquire Denard Span today from the Minnesota Twins for their number six prospect. With the acquisition, the Nationals now have a full slate in the outfield with Bryce Harper, Jayson Werth and Span for the forseeable future.

First baseman, Adam LaRoche, remains a Free Agent and by acquiring Span instead of signing a player like say, Michael Bourn, the Nationals just saved a bunch of money in their pursuit for an elite center fielder.

Logic would dictate the Nats would look to resign Laroche, who belted 33 HR and drove in 100 RBI for baseball’s best regular season team in 2012, back to his natural position at first base. If Washington does go this route, that leaves Michael Morse without a spot on the roster in a league with no designated hitter.

As a player still in his prime, Morse offers a 30 HR capable bat who can man first base or the outfield and offer a right-handed approach to a left-heavy Yankees’ lineup.

For the Yankees, Morse is in a walk year and will make less than seven million dollars in 2013. He can play the same positions Nick Swisher did and be acquired at a fraction of the price Swisher will likely get in Free Agency. This would also be a wise move for 2014.

Currently, one of the biggest obstacles for the Yankees to reach its $189 million dollar payroll deal in 2014 is deciding whether to extend Curtis Granderson and Robinson Cano.

It’s highly unrealistic both can be inked to long-term deals and the Yankees would be making a better decision signing Cano, a superior all-around hitter and elite second baseman, to a long-term deal over Granderson.

Trading for Morse, who with one year on his contract, no position if Laroche is resigned and coming off an abbreviated 2012, can happen likely for a couple of B prospects at worst.

The Yankees can trade Granderson or collect a pick for him walking, maintain a middle of the order bat, or let Granderson and Morse walk, which may be where they would end up anyway, except they won’t have to pay more for Ichiro, who is older and offers less power than Morse.

With the Bronx Bombers in the American League, they can acquire a player at an affordable contract, in his prime, on a one year deal and who can play two positions they can use depth at.

In addition, Morse can be shifted to Designated Hitter if he performed well in 2013 and was resigned by New York to offer some of the offensive relief when Granderson is inevitably not here in 2014.

With a healthy Mark Teixeira, Morse, Alex Rodriguez and Derek Jeter to compliment Cano, Gardner, Raul Ibanez (if he were re-signed) and Granderson, the Yankees will once again have a dangerous lineup against righties and lefties alike, and some insurance for the future when they look to cut salary.