Yankees Sacrificing the Future of the Franchise? 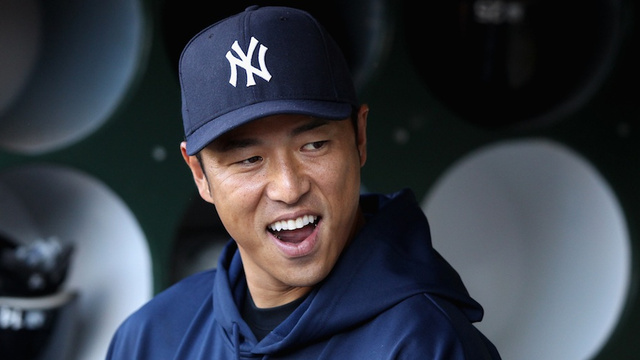 Kuroda could return to New York , Los Angeles or Japan

It’s worth debating just what a self-imposed salary cap in a partially implied salary capped sport could mean for a franchise not obligated to follow any rules.

Joel Sherman published an article on Sunday worthy of a second look. Sherman wonders if George Steinbrenner would have let the Yankees get into this situation and if he would have played by the rules, with the  short answers being “yes” and “no”.

If Hal Steinbrenner’s father were still alive and in control, New York would not be lowering its payroll to a magical $189 million dollar mark to avoid stiff luxury tax payments, nor would the front office have any regard for those stipulations to begin with.

Sherman implies “King George” never would let the Blue Jays take over headlines like they have or for the Yankees to sit idly by while all the big names go elsewhere and important contributors walk away because of a year or two or a few million more dollars.

Yankees are doing something unprecedented

First, the Yankees worked on developing a farm system again way back around 2005, a wise move not just for financial reasons, but to sustain winning.

Then we stopped seeing the over-the-hill veterans being signed for too long and too much from past success. Then we saw a very public squabble with Derek Jeter. Now we’re at the point where Hiroki Kuroda, who is as close to a necessity as possible for the Yankees to have a chance in 2013, possibly going out west to be closer with his family.

Something tells me if Kuroda were offered a second year or enough money, the private jet he could afford make his family distant problems a distant family problem. The question is, will the Yankees be willing to bend a little to get their man?

The “189” figure goes beyond just Kuroda, or Andy Pettitte and Mariano Rivera returning on one year deals, or Josh Hamilton going elsewhere, or not trading for Justin Upton, signing his brother, B.J. Upton, or even snatching up all kinds of talent from the Marlins as the Jays just did.

Toronto traded for: Josh Johnson, Mark Buehrle, Hanley Ramirez, Jose Reyes and John Buck, all players the Yankees could have theoretically fit somewhere on the roster and who left to get paid somewhere while being paid too much somewhere else.

When Bobby Abreu had the same situation in Philadelphia six years ago, it was the Yankees on the receiving end. They did it again when Xavier Nady and Damaso Marte were for sale in Pittsburgh.

For a while, it was the Bronx Bomber calling card to buy up the contributing and expensive veteran and send a second rate prospect back in return.

But the gamble Sherman writes about extends further than he recognizes.

The landscape of New York sports is changing

It’s reverting back to around 1993 when the Knicks and Rangers were building contenders, the Yankees were getting restless and the Giants were coming off recent glory. Of course, there will always be the Sabres, Islanders, (now) the Nets, Bills, Mets and Jets, but the big ticket franchises in New York city are: two Jim Dolan owned teams, a New Jersey home football team and the Yankees.

Fast-forward to fall of 2012 and the Giants are defending Superbowl champions, the Knicks are 7-1 and looking to improve for the third straight year, the Rangers are an NHL collective bargaining agreement away from contending for a Stanley Cup and the Yankees are worrying about a few million dollars.

Preface this by saying the New York Yankees will never have to worry about exposure. New York is the biggest market in the world and it will always be a baseball town, specifically a pinstriped, baseball town as the Mets continue to rebuild. But that doesn’t mean the Bronx Bombers should proceed without caution.

The Giants have won two Superbowls in five years in America’s most popular sport. They also lead the NFC East and are in a position to challenge again.

The Rangers acquired its biggest need before the lockout and had the best record in the conference and fell two games short of the Stanley Cup with one of the youngest rosters last season.

The Knicks are off to a franchise best start since 1993-94 when they ended up one game short of winning a championship. In Madison Square Garden, the arena is full regardless, but that doesn’t mean the Knicks and Rangers (if they ever get to the ice) can’t steal some ratings and maybe some season tickets for a company or two and the average sports nut.

Then there’s the Yankees

One championship since 2000 for a franchise with a floor of contending for championships. Three consecutive years of unmistakable playoff failure and aging. A stadium worth billions where if a fan leaves a seat on the ground level to go to the bathroom, people notice it looks more empty.

A fan experience catered to being “the team” in the city with corporate suites, leather seats and bars meant for the most expensive ticket, in case weather and other “fans” are an inconvenience.

The Yankees can’t really afford to bore or annoy its fanbase because it bases the franchise on the big ticket spenders, not the local family of four.

If corporate sponsors decide to go to the hotter team in town looking like it wants to win more or it means more cache with clients, that could cost millions more than any luxury tax.

What the Yankees are doing is admirable and wise for a successful franchise because overspending doesn’t make sense in any business model.

They just better make sure they know where the threshold is in a city with a sudden variety of attractive franchises.