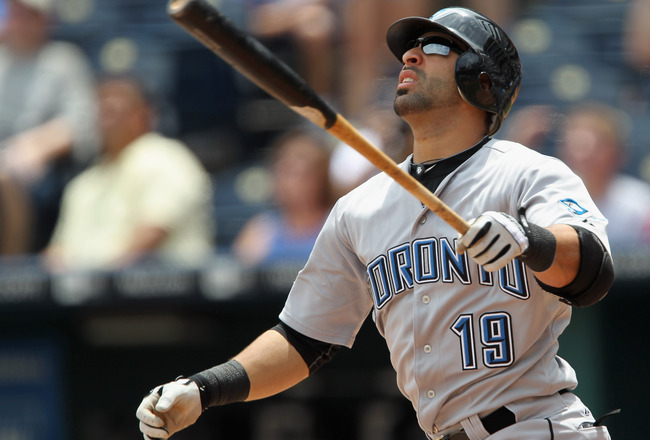 Championships are not won on paper. If they were, the New York Yankees would have significantly more World Series rings than the 27 they possess. Keep this in mind while processing this week’s blockbuster deal between the Miami Marlins and the Toronto Blue Jays.

On Friday, according to multiple media outlets, the Blue Jays signed outfielder Melky Cabrera to a two-year, $16 million contract.

The 28-year-old Cabrera was producing an MVP caliber season in 2012 when he was hit with a 50-game suspension on August 15 for using a banned substance. At the time, Cabrera sat atop the National League with a .346 average to accompany 11 home runs and 60 RBI.

With former manager John Farrell now in Boston, the Blue Jays are still searching for a manager. If the mega-trade is approved, and the Cabrera signing is finalized, the Toronto job will become more appealing since it appears the club will become relevant in the American League East for the first time since it won the World Series in 1993.

The Blue Jays still have question marks. With the acquisition of Buck, the team will have four catchers on its 40-man roster, including current starter J.P. Arencibia and one of the game’s most highly regarded prospects in Travis d’Arnaud. Buck or Arencibia will likely be traded.

Toronto is seemingly set at shortstop with Reyes and third base with Brett Lawrie, as long as both players can stay off the disabled list. Bonifacio and Izturis will compete for playing time at second base while Edwin Encarnacion and Adam Lind are slated to split time at first base and DH.

The outfield is mostly set with Jose Bautista in right, Colby Rasmus in center and Cabrera in left with Rajai Davis as a fourth outfielder and top prospect Anthony Gose awaiting his opportunity.

As for the rotation, that will be a strength for the Blue Jays with Brandon Morrow, Johnson, Buehrle and Ricky Romero. Since the lackluster J.A. Happ could be the No. 5 starter, and young arms Kyle Drabek and Drew Hutchison are not expected to be available until after the All-Star break as they recover from injuries, depth is an issue. Perhaps the Jays will trade a catcher for a starter, or sign a back of the rotation arm via free agency.

The bullpen includes closer Casey Janssen and potential closer Sergio Santos, who is recovering from an injury.

The Blue Jays will undoubtedly be more competitive in 2013 than they were this year, but with the depth in the American League East, a post-season spot is not assured, even with the upgrades.

Here is a position-by-position look at what else is part of the Hot Stove League banter this week:

Will the New York Mets trade National League Cy Young Award winner R.A. Dickey. It could happen, though the team picked up his $5 million option for 2013. Dealing Dickey would not make sense, though, even if he recently turned 38.

The knuckleballer was 20-6 with a 2.73 ERA in 33 starts and 233.2 innings this season. Considering he throws the knuckler, Dickey can feasibly have three to five more productive years as a starting pitcher.

The Tampa Bay Rays reportedly covet Wil Myers, who was named Baseball America’s Minor League Player of the Year after slugging 37 home runs, knocking in 109 runs and hitting .314 with a .987 OPS at the Double-A and Triple-A levels in the Kansas City farm system.

According to Fox Sports’ Ken Rosenthal, the Royals are uncertain about parting ways with him, even for a top of the rotation caliber young arm like Jeremy Hellickson or Matt Moore.

While the Royals appear open to acquiring a veteran starting pitcher, as they did when the signed Ervin Santana earlier in the offseason, the Rays are likely more inclined to want a hitter who has several years of team control, so the 21-year-old Myers wold seemingly be more intriguing to them than Billy Butler and Alex Gordon.

The Red Sox and Yankees are among the top suitors for Hiroki Kuroda, who turned in a solid season in 2012 for the latter club. The right-hander, who will be 38 in February, was 16-11 with a 3.32 ERA in 33 starts and 219.2 innings. Kuroda is not the top of pitcher who can anchor a rotation, but he is valuable nonetheless.

In many cases, when the Red Sox and Yankees are tangling over a free agent, no other club has a chance of signing him. This offseason is different. The Los Angeles Dodgers are also interested in Kuroda, and they have shown a willingness to pay whatever is necessary to land their target of pursuit.

Teams that are looking for less expensive starting pitchers who are returning from an injury and/or looking to reestablish themselves are looking at names like Scott Baker, Dallas Braden, Jeff Francis, Kevin Slowey, Shaun Marcum, Scott Feldman, Aaron Cook, Daisuke Matsuzaka, Chien-Ming Wang and Roberto Hernandez (who is the pitcher formerly known as Fausto Carmona).

Boston’s addition of well-respected catcher David Ross likely means that Jarrod Saltalamacchia will be wearing another team’s uniform in 2013. The Red Sox are high on 25-year-old Ryan Lavarnway, even though he struggled at the plate in a late-season look.

Even though Ross is on the roster, at least temporarily joining Saltalamacchia and Lavarnway, the Red Sox are reportedly pursuing free agent Mike Napoli, who has said that he is open to playing first base. In Boston, Napoli would likely serve as an occasional catcher but see most of his playing time at first base.

Tyler Flowers could be the next starting catcher for the Chicago White Sox, or they could team him with another backstop signed through free agency or acquired through a trade. Chances are, A.J. Pierzynski’s tenure with the club is finished.

Pierzynski and Russell Martin, who has drawn interest from the Texas Rangers, are considered the top two catchers on the free agent market.

The Texas Rangers appear reluctant to trade Elvis Andrus or Jurickson Profar, even for Arizona Diamondbacks outfielder Justin Upton. The club might keep Andrus at shortstop, insert the highly regarded Profar at second base and move Ian Kinsler to another spot, like first base.

Defensively sound Adrian Beltre is entrenched at third base, so that is not an option. First base is occupied by Mitch Moreland with top prospect Mike Olt in the mix. The Rangers could slide Kinsler to first, trade Moreland or Michael Young (and put the other at DH), and also deal Olt for an outfielder since they will apparently not re-sign Josh Hamilton.

Kinsler said that he would be willing to change positions if the Rangers asked.

Like many core Red Sox players, Dustin Pedroia was hampered by an injury-plagued 2012 campaign. Yet, the diminutive second baseman and veteran DH David Ortiz remain the faces of the franchise. Recognizing this, the Red Sox are interested in exploring a long-term extension with their team leader.

With the financial flexibility Boston has after last summer’s blockbuster trade with the Dodgers, it can be proactive with extensions for players like Pedroia and perhaps Jon Lester, Clay Buchholz and Will Middlebrooks.

As ESPNBoston.com’s Joe McDonald noted, the Red Sox would be wise to ink Pedroia to an extension before the Yankees do the same with Robinson Cano, who could get around $200 million.

With Reyes slated to anchor the shortstop position in Toronto, Miami will reportedly use Hechavarria at shortstop and Escobar at third base, though the Marlins could also flip Escobar to another team.

Arizona could be a potential destination for Escobar since the Rangers insist they will not deal Andrus to make room to Profar. Andrus would fetch Justin Upton for the Rangers, but obviously the Marlins would have to settle for much less in return for Escobar.

Teams interested in filling their shortstop void with Troy Tulowitzski will have to find other alternatives, according to Rosenthal, who reports that the Colorado Rockies want to keep him Tulowitzski and outfielder Carlos Gonzalez.

With the lean selection of third basemen in this offseason’s free agent market, it would seem that the New York Mets would be more motivated to sign David Wright to a long-term extension.

The club picked up Wright’s $15 million option for 2013, and after they pay Johan Santana $25.5 million in 2013, they can decline his $25 million team option for 2014 in favor of his $5.5 million buyout. That can free additional money to sign Wright for the long term.

Considering that he is the cornerstone of the club, and the free agent market for third baseman will be scant again next offseason, Wright in Queens makes sense.

With Hunter and Jackson set, the Tigers will likely choose between Avisail Garcia, Andy Dirks, Quintin Berry or Brennan Boesch for the left field spot.

The Braves and Phillies appear to be the chief suitors for free agent outfielder B.J. Upton. San Francisco wants to re-sign Angel Pagan, but since he is versatile and will be less expensive than Upton, Michael Bourn and Josh Hamilton, the Giants are facing competition.

Poised to begin their first season in the American League West, the Houston Astros are in need of a DH.Lance Berkman could fill the void.

Berkman, who will be 37 on opening day and underwent two surgeries on his right knee in 2012, played in Houston from 1999-2010 and slugged 326 home runs. He won a World Series ring with St. Louis in 2011 while hitting 31 home runs, driving in 94 runs and batting .301 before he was limited to 97 plate appearances due to injuries this season.