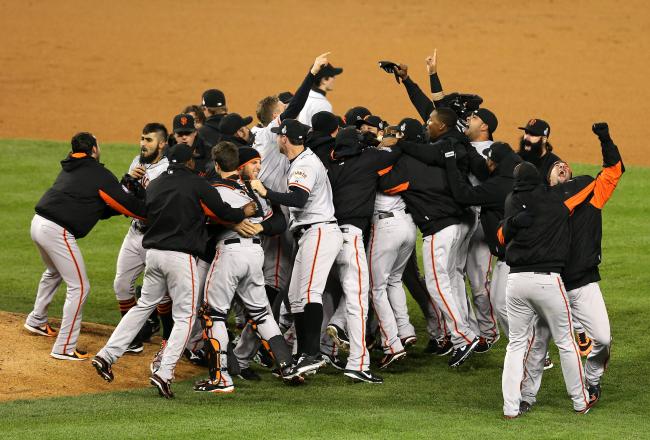 With the 2012 World Series hangover gone, it’s time for Giants gear up for a title defense

The San Francisco Giants will not have the same problem they faced in 2010. Remember, that year featured a “band of misfits” that made a late-season run to win it all. Many position players needed to be let go and new players were needed to fill in.

Gone were World Series hero Edgar Renteria, who hit the game-winning three-run homer off Cliff Lee in the clinching Game 5. Feeling “insulted” by the Giants offer of $1 million, he left for the much greener (money) pastures of Cincinnati and continues to under-perform.

Also not feeling the love was Juan Uribe. Hitting clutch homer after homer in 2010, Uribe was also “insulted” by the Giants offer of a one-year deal and left the team for the hated L.A. Dodgers (3 years, $21 million). This was quite possibly the ONLY time Giants fans could rejoice about the Dodgers signing a former Giant, as Uribe has been a flop since day one.

Once again, Brian Sabean and Giants management made all the right moves and refused to overpay for a marginal player (Aaron Rowand) or give high-salaried, multi-year deals to once great – but thankfully have come back to form – players like Barry Zito. 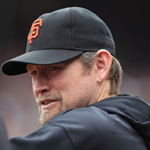 Following a great 2010 that featured many big flies, a bunt heard ’round the world, and a Rally Thong, Aubrey Huff was signed to a two-year, $22 million contract. The past two seasons have been a disaster for Huff and Giants fans alike. He was always a good clubhouse presence, but on the field where it counted, there was no production.

The Giants bought out his 2013 club option for $2 million, so the rally thong is gone.

But it’s all good news for 2013 and the San Francisco Giants. ALL starting pitchers, Matt Cain, Tim Lincecum, Barry Zito, Madison Bumgarner and Ryan Vogelsong are signed and will be ready to go in defense of the title. In a stellar relief corps, Guillermo Mota and Brad Penny will probably be let go, but Jeremy Affeldt – a lefty that can eat innings and get both lefties and righties out – may be let go due to financial constraints.

Affeldt made $5 million last year and will probably command a long-term deal making considerably more than that amount. The problem for Affeldt is that we have two more than capable lefties under contract (Javier Lopez and Jose Mijares). It would be sad to see Affeldt go, but a lefty reliever is not a key “need” for the Giants. Sergio Romo will be back and Brian Wilson has begn light tossing, in the rehabilitation process from Tommy John surgery

Players more than likely to go include:

Melky Cabrera: No reason needed. We all know his story.

Freddy Sanchez: After a great 2010, Sanchez hasn’t seen the field since then with a multitude of injuries. He was always “close” to coming back, but never actually made it back. He may be looking to redeem himself, but if it costs the Giants more than the minimum veteran’s contract, it’s bye-bye Freddy.

Xavier Nady: A welcome addition late in the season, Nady’s role may be better suited for a younger player.

Ryan Theriot: “The Riot” may be gone and will always be remembered for his scoring the game-winning run in Game 4 of the World Series. When the Giants brought in Marco Scutaro, Theriot saw very little playing time at second and only played sparingly. His bat will likely bring offers from other teams, and Theriot will look for a place to call home in 2013.

And that leads us to the Giants’ two biggest acquisitions – one before last season and one during the season – Angel Pagan and Scutaro.

Pagan was inexplicably not even tendered an offer for 2013.

He had his ups and downs during the season, but remained a constant in the clubhouse and played hard all season. When moved from fifth to leadoff in the batting order, Pagan excelled. It was commonplace to see him on third base, setting the Giants team record for triples.

The Giants are hoping to re-sign Pagan after letting him test the free-agent waters, but it should not surprise anyone if he signs with another team. If so, the Giants may give their number one minor league outfielder Gary Brown an chance to see the bigs. 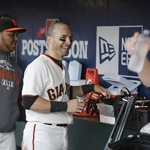 In a deal that went virtually unnoticed in August, Scutaro was all-world since coming over from the lowly Colorado Rockies.

An all around good guy, Scutaro turned a great season into a great postseason, winning the NLCS MVP and getting the game-clinching single in the World Series, scoring Angel Pagan.

The only downside to signing Scutaro is that he’s 37-years-old. That’s about it. How much will the Giants offer and how long of a contract will the give him? We’ll just have to wait and see.

Could the Giants have interest in Josh Hamilton

There’s a superstar player out there named Josh Hamilton. Before last season, he could have commanded a 7-year deal for about a jillion dollars.

Off-field antics may have cost him that contract, but are the Giants “players” in the Hamilton sweepstakes? Makes sense.

The Giants will cut about $30 million off our payroll for this season, so how about a qualifying offer of $90 million for three-years as a starting point.

Hamilton is only 32, so the team will be getting a superstar in his prime and will get to see him perform at his peak. Brandon Belt can shift to left and Gregor Blanco can move to center and Hunter Pence will remain in right. A nice outfield indeed.

The quest to repeat begins.

HollyFrontier Co. Given Consensus Recommendation of “Hold” by Analysts