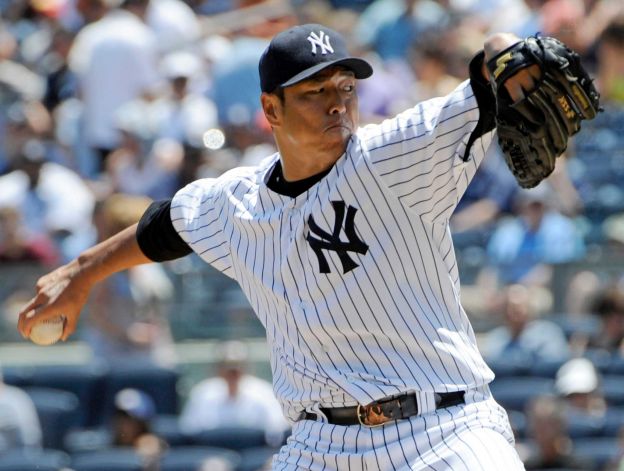 The Yankees have a huge number of impactful Free Agents walking out the door this offseason. Not since 2009 when New York saw: Bobby Abreu, Andy Pettitte, Mike Mussina, Jason Giambi and Ivan Rodriguez walk out the door have there been so many players with the potential to go elsewhere from the Bronx.

That off-season, New York replaced over $80 million dollars in payroll with three major free agent signings when they inked: A.J. Burnett, CC Sabathia and Mark Teixeira (along with resigning Pettitte) en route to a World Championship the following fall.

Replacing the payroll is not necessarily an identical plan this time around. The Yankees have one eye on winning in 2013 and another on making sure they have cut roughly 20 million dollars in payroll by 2014 to avoid major taxes under the new CBA. With those two goals in mind, New York is looking for short term deals for solid players.

As are lesser parts such as: Eric Chavez and Andruw Jones.

The latter two are no-brainers, the Yankees will simply let them walk and resign them if need be at a low, bench player price.

The other players represent five positions needed to be filled (catcher, two starters, a right-fielder and a closer) and nearly 75 million dollars.

This year, to offer a “qualifying offer” a team must be willing to pay $13.3 million for one year. This means a high one year deal which could entice a good player and also keep them off the long-term books.

Here’s a guess at who does and doesn’t get the offer and why.

It’s not clear if the Yankees will even bring Martin back at all, but it’s a guarantee they wouldn’t at that price. With a mostly poor season, Martin is unlikely to get multi-year offers anywhere else which means the Yankees can sign him to a one year deal and at probably about half the price of a qualifying offer.

Despite three heroic home runs in the postseason, Ibanez is a 40-year-old, designated hitter, who delivered 19 home runs with a short porch in right and hit .240 in a hitter’s park. Likely, the Yankees will use the DH spot for extra at-bats to guys like Eduardo Nunez or half days off for guys like Derek Jeter and Alex Rodriguez.

One of the major benefits to a qualifying offer besides a guaranteed one year deal if accepted, is that by a player turning it down, the team losing that player receives a supplementary pick after the first round and the acquiring team loses its first round pick if it is not a top 10 protected selection.

With that said, there is no chance Pettitte plays anywhere else and if he does come back, the Yankees signed him for just 2.5 million dollars last year. He’s not worth much more than that this time around either.

Same situation as Pettitte. Rivera can use retirement as leverage but there is no chance he plays anywhere else. Though a qualifying offer would be less than Rivera’s 2012 salary, the future Hall of Famer is coming off a major injury and the Yankees will want negotiation abilities to fit Rivera into its 2013 plans.

The Yankees would be wise to resign Ichiro, assuming it’s to a one year deal. Assuming he’s more of the .322 hitter with 13 SB that he was with the Yankees the last two months of the season, the outfielder adds an exact element New York lacks; the ability to run the bases, make contact and hit consistently.

This really showed in the playoffs when it seemed Ichiro was the only guy to hit after Jeter’s injury. That said, even if he does come back and even if it’s for one year, the Yankees won’t want to risk over 13 million dollars on a corner outfielder in the twilight of his career.

Recent reports indicate Kuroda may prefer a one year deal this late in his career because it puts no pressure on him to perform beyond each season, but this is still going to be the hardest decision of all qualifying offers. Kuroda made $10 million dollars last year and likely outperformed that. Are the Yankees willing to go as high as $13 million or would they want to try to get him back closer to his 2012 salary?

The best guess would be Kuroda comes back on a one year deal and by offering a qualifying offer, the Yankees accept giving him a raise and insure no other team will be willing to swoop in and potentially ruin negotiations. This allows the Yankees to have a number two starter in 2013 and no financial commitment beyond that.

Swisher, unlike Kuroda, is said to be seeking a l0ng-term deal and teams like the Red Sox and Phillies, with financial relief and devoid of offensive talent, particularly in the outfield, would surely give it to him. The Yankees have little plans for Swisher long-term with Curtis Granderson and Robinson Cano‘s contracts up after 2013, so they might as well take the extra draft pick when Swisher inevitably turns this deal down in search of longer security.

Now that Soriano has officially opted out of his deal, it’s official Scott Boras and company believe Soriano will get a long-term contract. While 13 million seems fair for an annual salary to a closer coming off the season Soriano just had, the Yankees won’t want to commit that much to a multi-year deal.

After all, Soriano’s opting out officially ends the first go-round when they offered the closer three years with opt outs to be the setup man. With Rivera rumored to likely return and with the qualifying offer being good for just one year, Soriano is all but guaranteed to reject it and the Yankees are guaranteed to receive compensation.