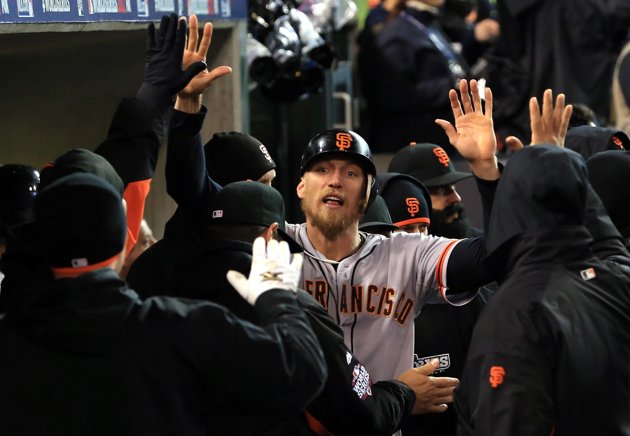 The San Francisco Giants closed out a four-game sweep of the Detroit Tigers with a 4-3 victory in 10 innings Sunday night to win their second World Series in three years.

Ryan Theriot hit a leadoff single in the 10th, took second on a sacrifice and scored on Marco Scutaro‘s single to center.

Scutaro became the first player since Edgar Renteria in 1997 to win a World Series with an extra-innings hit.

Matt Cain wasn’t particularly sharp early on, but he kept the Tigers off the scoreboard for two innings, extending the pitching staff’s scoreless streak to 20 innings. the Giants scored first when Brendan Bell tripled to deep right field scoring Hunter Pence. Max Scherzer pitched well for the Tigers, pitching into the seventh inning giving up three earned runs and striking out eight.

Then in the bottom of the third with two outs and a runner on, Miguel Cabrera hit a high fly ball to right field that kept carrying and carrying at Comerica Park, where the wind was blowing directly out to right much of the night.

The two-run homer gave the Tigers a 2-1 lead, until Buster Posey homered to left field after Scutaro reached on infield single giving the Giants a 3-2 lead.

Delmon Youmg tied the game with a home run to right field in the sixth inning tie the game 3-3.

The game remained tied until Scutaro’s base hit in the 10th. Sergio Romo struck out Austin Jackson to begin the bottom of the 10th then hit pinch-hitter Don Kelly with a pitch. Romo then struck out Miguel Cabrera and Prince Fielder and the Giants were World Champions once again. Pablo Sandoval, who hit three homers in Game 1, was selected Series MVP. He was 1 for 5 in Game 4, dropping his Series average to .500 (8 for 16).