5 Things The Giants Must Do To Win The World Series 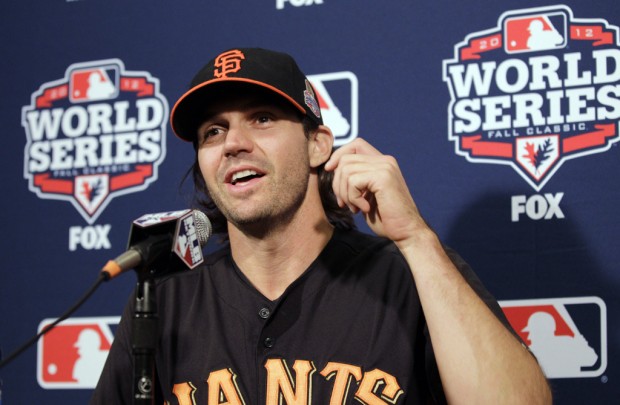 San Francisco could win their second World Series Championship in three years, if…

When you look on the Internet and see that a celebrity has died, an “Obituary” featuring a list of accomplishments will show up along with sweet, personal sentiments. These obituaries are written long in advance, waiting for the moment of death to occur.

As of today, I have written TWO obituaries for the San Francisco Giants. The first was written following Game 2 of their series against the Cincinnati Reds and the second was written after Game 4 of the NLCS versus the St. Louis Cardinals.

Fortunately, I have not had to hit the “Send” key.

But are these Giants out of miracles? Are they just happy to have made the World Series? If you believe those “baseball talking heads,” the Giants have absolutely NO chance against the Detroit Tigers. They all feel Detroit has the better pitching, hitting, uniforms, girlfriends, bars, restaurants, wives, peanut vendors and auto manufacturers than the Giants. (I have to reluctantly give them the last one.)

This year’s post-season “magic” for the Giants carries no weight for prognosticators across the country.

But there IS hope, Giants fans. If the Baseball Gods can smile down upon us, these five things will need to happen. If they do, San Francisco will garner their second World Series Championship in three years.

Although Buster Posey and Hunter Pence have been struggling, the top of the lineup has been superb. Angel Pagan and Marco Scutaro have been getting on base and Pablo Sandoval has been swinging the bat well for power and for average. Score early … score often. And not a lot of pressure is on Zito for this start.

We don’t need seven shut-down innings. This is not an elimination game. All the Giants need is five quality innings from Z-man and let the bullpen take care of the rest.

If Pablo, Posey and Pence hit like the proven hitters they are, the Giants should be able to put enough runs on the board each game to get the four necessary wins and claim the Championship. Sandoval has hit well during the St. Louis series, but if  Posey and Pence don’t pick it up, he will not see many pitches to hit.

Both Pence and Posey are fastball hitters, and the Tigers staff throw primarily heaters. Advangage: Giants. Sandoval does not care WHAT a pitcher throws. If it is within the stadium, odds are he will swing at it.

Of course, I kid. We all know Marco is playing out of his mind, and “Blockbuster” should continue to do so. Quite possibly one of the best mid-season pick-ups in MLB history. Scutaro went from the Colorado Rockies and a mountain view, to the San Francisco Giants and a World Series appearance. Not too shabby, Brian Sabean.

2: Take Advantage of the Home Field

Following a series-clinching Game 7, the Giants get to sleep in their own beds and return to baseball tonight as if it were the regular season. Just like the Giants have regained their stride, so have the fans. AT&T has been a raucous joint the past two games and the Giants feed off that energy.

Each pitch is met with a reaction and that will only benefit the Giants. If the Giants can get through the Zito start in Game One and the Madison Bumgarner/Tim Lincecum two-headed monster start in Game Two, the next two games may be in Detroit, but feature our pair of aces – Ryan Vogelsong and Matt Cain. Let’s get ’em at home.

1: The Giants Need a Lotta Bull

BULLPEN, that is. The Giants bullpen has been stellar all season, and are even better in the playoffs. Everyone knows of the heroics performed by Sergio Romo, Santiago Casilla and Jeremy Affeldt, but they are much, much deeper than those three.

Left-handed specialist Javier Lopez continues to get lefties out, and George Kontos – a righty reliever we received from the Yankees in a “minor” trade for back-up catcher Chris Stewart prior to the season – continues to eat up innings and keep the Giants in every games.

The Tigers’ pen is “shaky” at best, and their regular closer, Jose Valverde, has been demoted in favor of lefty Phil Coke. If the Giants can get to the Tigers’ starters, only good things can happen. On the other hand, if the Giants starters can get some quality starts, it’s GAME OVER.

So there it is, folks. Five things the Giants need to bring another World Series back to San Francisco. Regardless of the outcome, there will be NO obituary written. They will leave their hearts out on the field and you can’t ask for anything more than that.

And just WAIT until the Giants get Josh Hamilton next season. But that’s another story