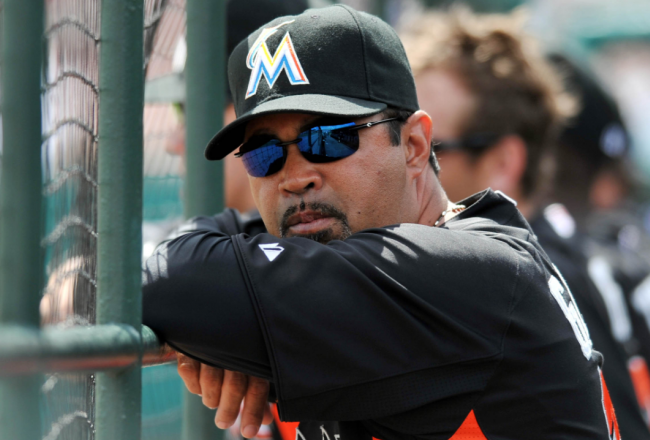 The Ozzie Guillen watch is over

The Miami Marlins organizational meetings produced their first casualty today as a team announced the firing of their embattled and sometimes controversial manager. Guillen was signed to a four-year, $10 million contract last winter and still has three years and $7.5 million left on his deal.

The Marlins finished the 2012 campaign with a 69-93 record. the search for a replacement will begin immediately according to President of Baseball Operations Larry Beinfest.

“After careful consideration following the disappointment of the 2012 season, we decided to dismiss Ozzie,” president of baseball operations Larry Beinfest said in a statement. “Our managerial search begins immediately and our hope is that a new manager, along with roster improvements, will restore a winning culture.”

The team traded two minor league players to secure the services of Guillen, who spent eight years as the manager of the Chicago White Sox, winning the World Series in 2005. Guillen’s first season with the Marlins began to turn south over controversial comments he made about Cuban leader Fidel Castro. The team suspended Guillen for five days because of the remarks.

In December, the Marlins signed All-Stars Jose Reyes, Mark Buehrle and Heath Bell to contracts worth a combined $191 million. The Marlins moved into a new stadium with high expectations. Those expectations never materialized and the team was dismantled in July, starting when the  Detroit Tigers acquired Anibal Sanchez and Omar Infante for pitching prospect Jacob Turner, and Rob Brantley and Brian Flynn. the team then sent  Hanley Ramirez and Randy Choate to the Los Angeles Dodgers in in return for RHPs Nathan Eovaldi and Scott McGough.

Would be closer Heath Bell and his bulky contract was traded to the Arizona Diamondbacks for cash considerations and a prospect in a three-way deal including the Oakland Athletics. Bell became a source of controversy in Miami after signing  three-year, $27 million free-agent deal with the Marlins and publicly feuding with Guillen.

Marlins owner Jeffrey Loria reportedly was not happy with Guillen make comments about his job after the season.  “The only thing I worry about, make sure that American Airlines plane is ready for Madrid. “If Jeffrey doesn’t think I’m doing the job I should do … it’s not the first time he’s fired a manager,” Guillen told reporters.

“Look yourself in the mirror and ask why so many (expletive) managers come through here.”

Apparently that was enough for Loria to make the decision that was made to fire Guillen. Bench coach Joey Cora was also fired

Candidates to become the Marlins fifth manager since 2010 have yet to be determined, but Tampa Bay Rays bench coach Dave Martinez could be considered. The Marlins are going young and under the tutelage of Rays manager Joe Maddon, Martinez could be a perfect fit for the Marlins. Martinez is known for having a strong rapport with young players as well as veterans.

Others could include  include recently fired big-league managers Bobby Valentine (Red Sox) and Manny Acta (Indians) as well as ex-Marlins such as Mike Redmond, currently managing in the Blue Jays minor league system, and possibly even former All-Star third baseman Mike Lowell.