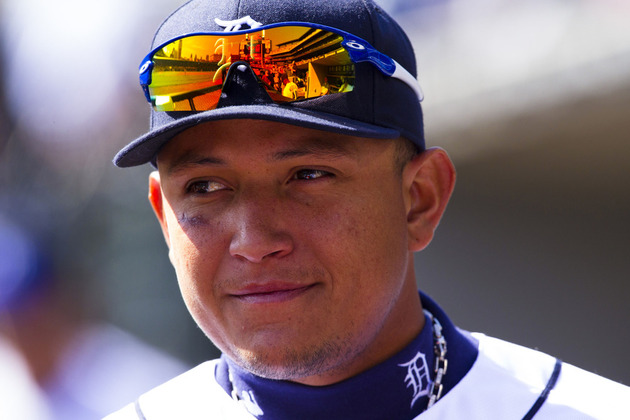 Nursing a sore ankle and playing in every game since August 26, Detroit Tigers third baseman Miguel Cabrera was pulled from Tuesday night’s game at Kansas City after flying out in the fifth inning.

Considering that the Tigers wrapped up the American League Central title on Monday and are preparing for the ALDS, the decision by manager Jim Leyland to remove Cabrera would not seem puzzling most years. This season, and what’s at stake, is different.

Cabrera is attempting to become the first Triple Crown winner in the majors since Boston’s Carl Yastrzemski in 1967. Cabrera leads the Triple Crown categories in the American League with a .331 average, 44 home runs and 139 RBI.

Cabrera has a comfortable lead over Texas’ Josh Hamilton in the RBI category but Hamilton has 43 home runs and in the batting race title Mike Trout (.325) and Joe Mauer (.321) were within range entering Tuesday night’s games.

Luis Mendoza (8-9, 4.36 ERA) is scheduled to start for Kansas City on Wednesday night when Cabrera can clinch the Triple Crown.