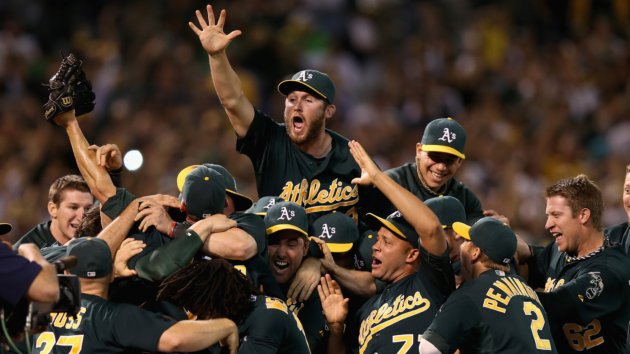 Their spot in the postseason now secured with a win over the Texas Rangers on Monday night, the Oakland A’s are not content with the second wild card. The scrappy young club is one game behind the heavily favored Rangers with two games remaining.

Once 13 games out of first place on June 2, the A’s are setting their sights on the American League West title. The stakes are high in the final two games of the regular season. If  Oakland surges past Texas for the division crown, it will have extra time off and be able to set its rotation for the ALDS. If the Rangers hold on, then the A’s will battle either the Baltimore Orioles or the New York Yankees in the wild card game.

On Monday night, the A’s eliminated the Tampa Bay Rays from wild card contention when they edged Texas, 4-3. The win was a microcosm of Oakland’s season with solid starting pitching, reliable work from the bullpen and just enough production from the lineup.

Jarrod Parker, a 23-year-old rookie right-hander, improved to 13-8 and a a 3.47 ERA on the season by limiting the potent Rangers lineup to three runs and six hits over six innings. Sean Doolittle (3.18 ERA), Ryan Cook (2.14 ERA) and Grant Balfour (2.60 ERA) each tossed scoreless inning to preserve the victory. Balfour recorded his 23rd save in 25 opportunities and has a .163 opponent’s batting average and a 0.95 WHIP.

Coco Crisp, who is hitting .367 over his last 10 games, had two hits, two runs and an RBI. Though he is batting just .262, he has added 11 home runs and 39 stolen bases from the leadoff spot. With the A’s getting production from Crisp and shortstop Stephen Drew (.302 average over his last 10 games), Yoenis Cespedes and Josh Reddick are not carrying the offensive load.

Left-hander Travis Blackley (5-4, 4.00 ERA) will oppose Texas lefty Matt Harrison (18-10, 3.26 ERA) in a pivotal game tonight in Oakland. If the A’s win, they play for the division title on Wednesday. If they lose, they will prepare to meet the Orioles or the Yankees in the winner-take-all wild card game.

Darden Restaurants Now Covered by Analysts at Bank of America