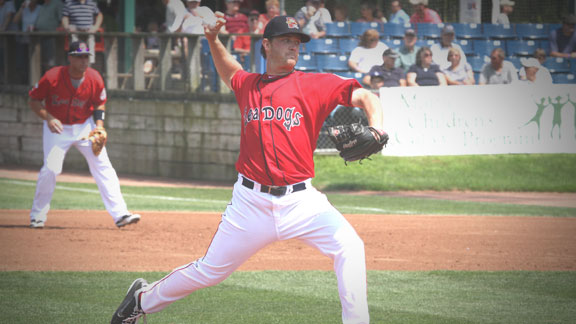 While one new age knuckleballer, R.A. Dickey was continuing his pursuit of the National League Cy Young Award on Tuesday night in Queens, another one, Steven Wright was doing his best to capture the attention of the Boston Red Sox while pitching in the International League championship series in Pawtucket, R.I.

Dickey, the 37-year-old right-hander whose perseverance was written about by Baseball News Source this week, had a chance to win his 19th game of the season when he carried a 2-1 lead into the seventh inning against Washington. He recorded the first out before allowing a base hit to Kurt Suzuki followed by a two-run home run by pinch-hitter Tyler Moore.

The Nationals added a few more runs and defeated the Mets, 5-3, sending Dickey to 18-5 with a 2.68 ERA. He allowed three runs and eight hits with two strikeouts and three walks over seven innings.

At McCoy Stadium in Pawtucket, 28-year-old Wright held Charlotte (White Sox) to two runs and six hits with six strikeouts and two walks over seven innings to earn the victory as Pawtucket topped the Knights, 7-2, in Game One of the International League’s Governor’s Cup Championship.

Wright follows Dickey’s starts closely and identifies with the 1996 first round pick out of the University of Tennessee by the Texas Rangers. Dickey has what Wright is striving to achieve – a full-time gig in the majors throwing the knuckleball.

Though he is 28, Wright knows that Red Sox knuckler Tim Wakefield didn’t have a full-time rotation spot in the bigs until he was the same age. Dickey bounced around between the majors and minors for several seasons before finding success and a home with the Mets in 2010.

Wright and Dickey are similar to other knuckleballers in that they had no choice but to throw the pitch full time if they wanted to remain in professional baseball. They are different, though, because they each throw a hard knuckler that crosses the plate at 80 m.p.h.

Boston acquired Wright from Cleveland for first baseman Lars Anderson at the July 31 non-waiver trade deadline. He has given the Red Sox reason to believe he has potential to become an effective Major League pitcher, an opinion that is supported by former Major League knuckleballer Tom Candiotti. Wright features a 90 mph fast ball, but Candiotti taught him how to throw the fluttering pitch. Candiotti told the Cleveland Plain Dealer in June that he believes “it’s only a matter of time” before Wright will be in the majors.

Wright posted a 3.15 ERA and a 1.20 WHIP in four starts at Pawtucket after one six-inning outing at Double-A Portland that saw him allow one run and six hits. That followed a 2.49 ERA in 20 starts before the trade this season at Double-A Akron.

Wright was a second round pick by Cleveland in 2006 as a traditional pitcher who transitioned to using the knuckleball as his primary pitch last season.

Dickey is currently the lone knuckleballer in the majors. Wright could join him as early as late September. The Red Sox must place Wright on their 40-man roster to protect him from this December’s Rule 5 Draft, and since they are not in contention for a post-season spot, he could get a start when the Governor’s Cup is completed.

If Wright rivals Dickey’s success for the long term, it could spur a new breed of knuckleballers who throw the pitch with more velocity and control, which could prolong the careers of starters who otherwise would fall out of affiliated baseball.