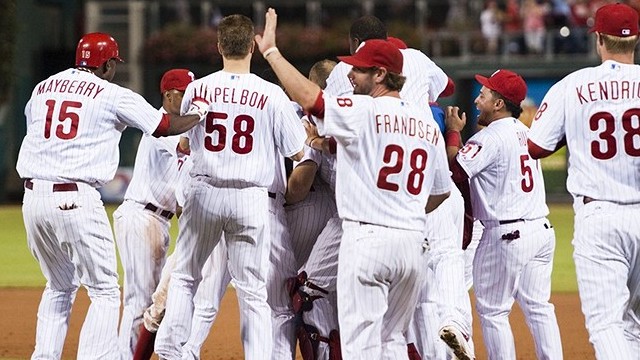 After a victory over Miami on Tuesday, Philadelphia reached the .500 mark for the first time since June 4

Phillies are now contending for a wild card spot

Not long ago, baseball pundits were debating over whether the Boston Red Sox or the Philadelphia Phillies were baseball’s most disappointing team this season. The answer now is clear. Once potentially headed for a last place finish in the National League East in a year when their roster has been depleted by injuries to key players, the Phillies are now contending for a wild card spot.

After a victory over Miami on Tuesday, Philadelphia reached the .500 mark for the first time since June 4 at 71-71. Though they unloaded names like Hunter Pence, Shane Victorino and Joe Blanton, the Phillies are just four games behind St. Louis for the second wild card. They have won six in a row, 14 of 18 and 34 of 54.

Phillies fans didn’t seem to mind when general manager Ruben Amaro Jr. traded away the popular Victorino along with the power-hitting bat of Pence and a starting pitcher in Blanton because it appeared that 2012 was a lost season in Philadelphia. Then the team started its unexpected turnaround.

Ryan Howard and Chase Utley, both of whom missed a long stretch this season, are in the lineup. Roy Halladay, Cliff Lee and Cole Hamels are anchoring the rotation. Left-hander Kyle Kendrick is 5-1 with a 1.49 ERA (seven earned runs in 42.1  innings) in his last six starts, and 7-2 with a 2.34 ERA (15 earned runs in 57.2 innings) over 15 appearances since the All-Star break.

Juan Pierre – who has been coveted by multiple teams in need of an outfielder, including the San Francisco Giants – is batting .309 with 34 stolen bases, including a .440 mark (11-for-25) with seven runs in his last 10 games.

Shortstop Jimmy Rollins, who was recently benched for not running out a pop up last month, is batting just .247 but over his last 10 games he has a .310 average with three home runs, seven RBI and six runs.

Catcher Carlos Ruiz, who had been on the disabled list since early August with plantar fascitis in his left foot, was activated last week and delivered an RBI double on Tuesday. He is batting .340 with 14 home runs, 60 RBI and a  .968 OPS and was a National League Most Valuable Player contender before his injury.

Add those names to a lineup that also has Howard and Utley; a rotation that features the Big Three plus a confident Kendrick; and a bullpen that boasts an elite closer like Jonathan Papelbon (2.48 ERA, .212 batting average against, 33 saves in 37 opportunities) and the Phillies have a legitimate chance to reach the postseason.

After today’s series finale against Miami, Philadelphia has a four-game series at Houston and a three-game set at the New York Mets before two challenging series against Atlanta and Washington. They finish the regular season with three at Miami and three at Washington.

If the Phillies find a way to reach the playoffs, they will be a dangerous team to face as long as Halladay, Lee and Hamels are healthy.