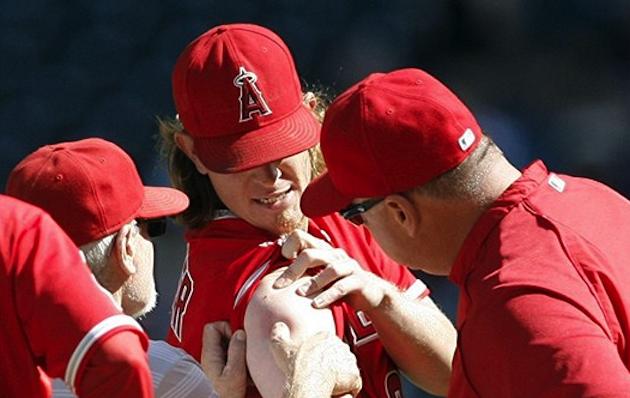 Fresh off a sweep of the Oakland Athletics, the Los Angeles Angels got some disappointing news  when it was reported that  ace Jered Weaver has been diagnosed with tendinitis in his right biceps. Weaver will miss his scheduled start against the Detroit Tigers this weekend.

The team plans to announce who will replace Weaver in the rotation this weekend. Weaver, who is 16-4 with a 2.86 , gave up 15 earned runs and 22 hits in 17 innings of his three starts.  the Angels off day on Thursday may work in their favor.

The Angels will start Ervin Santana,C.J. Wilson and Zack Greinke on regular rest against the Tigers and Dan Haren on Monday night against Oakland. Weaver would then pitch Tuesday night if he is ready to go.

The Angels have been playing some of their best baseball of the season of late, winning 12 of their last 15 games and strong pitching has been the reason why. Angels  starters have combined to go 10-2 with a 3.19 ERA. The bullpen has allowed only one earned run in 23 2/3 innings during the last nine games.

“We’ve been pitching great baseball for three or four times around the rotation, and that’s important,” Scioscia said. “The bullpen also came up with some big outs in the [Oakland] series.”

Wanchain Trading Up 2.1% This Week