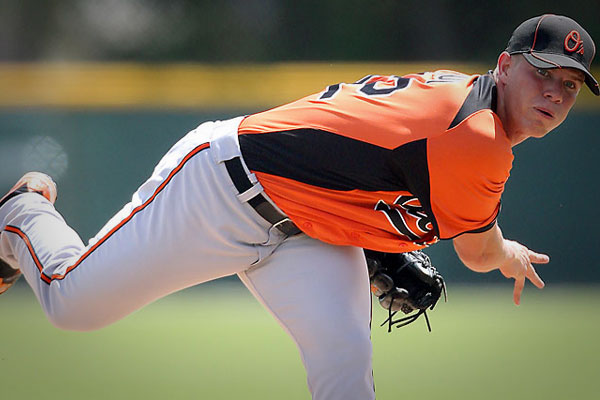 Striving for their first post-season appearance since 1997, the Baltimore Orioles have an enviable roster of under-30 core players like right fielder Nick Markakis, center fielder Adam Jones and catcher Matt Wieters. The Orioles are getting help in the stretch run from one of the best prospects in baseball, 20-year-old Manny Machado.

The third overall pick in the 2010 draft and the top prospect in the Baltimore Orioles organization according to MLB.com, Machado has cooled off after a blistering start to his Major League career that saw him belt two home runs against the Kansas City Royals in his second game on August 10.

Machado, whose long-term Major League future is likely at shortstop, is Baltimore’s starting third baseman and batting .259 with three home runs, nine RBI, two triples and a .828 OPS in 54 at-bats since he was summoned from Double-A Bowie to the Orioles on August 9.

Rated No. 9 on Baseball America’s 2012 Mid-Season Top 100 Prospects List, the 20-year-old Machado has drawn comparisons to a young Alex Rodriguez, who he works out with in the off-season.

Machado is part of a deep Orioles farm system.

Here is a look at Baltimore’s top 10 prospects:

Over three seasons in the minors, Machado has seen action at shortstop in 203 games while playing third base twice and filling the DH role three times. The Orioles called him up to play third base because J.J. Hardy is a defensively proficient shortstop and Mark Reynolds and Wilson Betemit are not known for their gloves, and Reynolds is better suited for first base. Machado was in his first season at Double-A Bowie, hitting .266 with 11 home runs, 59 RBI, 13 stolen bases and a .789 OPS in 402 at-bats. Featuring plus bat speed, Machado is projected to hit for average and power when he improves his plate discipline. At Bowie, the 6-foot-3, 185-pound right-handed hitter had five triples, 26 doubles and a .352 on-base percentage to accompany his .266 average.

The 19-year-old Bundy is the seventh-best prospect in baseball according to MLB.com and was No. 1 overall on Baseball America’s 2012 Mid-Season Top 50 Prospects List,He has a fast ball, a slider, a curve ball and a change-up in his arsenal, and he features excellent command. He could see time in Baltimore’s bullpen in September, but his long-term future is as a top of the rotation starting pitcher. He opened the season at Delmarva, where he overmatched hitters by not allowing an earned run and surrendering just five hits in 30 innings. His batting average against was a remarkable .053. At advanced Single-A Delmarva, he posted a .233 opponent’s batting average and a 2.84 ERA in 12 starts and recently made his Double-A debut, where he is 1-0 with a 3.18 ERA in two starts.

Ranked by MLB.com as the third-best second base prospect in baseball, the Curacao native was signed as a shortstop but moved to second base with the presence of Machado in the system. Like Machado, Schoop is athletic and versatile. The 20-year-old Schoop was No. 82 on Baseball America’s pre-season top 100 list and is hitting .244 with 13 home runs and 51 RBI in 520 plate appearances at Double-A Bowie this season. Machado and Schoop could form an athletic middle infield duo for several years in Baltimore.

A sixth round pick out of high school in 2011, the 20-year-old Delmonico is the son of former University of Tennessee head coach Rod Delmonico and his brother Tony is a former Dodgers farmhand and currently pitching in the independent Frontier League. The left-handed hitting first baseman and second baseman has a high baseball IQ from being a coach’s son and features a disciplined plate approach. He has a .249 average with 11 home runs and 54 RBI at low Single-A Delmarva this season.

A second round pick out of Vanderbilt in 2011, the 22-year-old Esposito is a defensively sound third baseman with power at the plate. However, he has just five home runs and 49 RBI with a .209 average and 111 strikeouts in 460 at-bats, so it has been a slow adjustment to professional pitching.

A second round pick out of high school in 2008, the 22-year-old Avery made his Major League debut this season, batting .233 with six steals in 90 at-bats earlier this summer. He has plus speed and he projects as a leadoff hitter and a base stealer in the majors. At Triple-A Norfolk, he has a .240 average with eight home runs, 34 RBI, five triples and 21 stolen bases.

A ninth round pick out of high school in 2010, the 21-year-old Bridwell has struggled with command early in his professional career. At Delmarva, he has a 4-9 record with a 6.09 ERA and a 1.64 ERA over 21 starts and 109.1 innings. His sinking fast ball can reach the mid-90s, and he is developing a curve ball and change-up.

The 20-year-old Davis is the type of kid everyone loves to root for. Signed as a undrafted free agent out of Catonsville Community College and born in Baltimore, Davis is one of the fastest players in the Orioles farm system and has moved from shortstop (where he played in college) to center field. He has a .252 average and 29 stolen bases at Delmarva and has seen time at advanced Single-A Frederick this season.

Yes, Bundy is related to the Dylan Bundy. He is the less heralded yet promising older brother of the Orioles phenom. An eighth round pick out of high school in 2008, the 22-year-old Bundy has progressed to Double-A Bowie, where he is pitching with his brother. The elder Bundy is struggling, though with a 6.25 ERA and a 1.65 WHIP in 17 starts.

A third round pick out of high school in 2008, the 22-year-old Hoes has 20 stolen bases along with a .294 average between Bowie and Norfolk this season, so he is on the cusp of the majors. Hoes projects as a fourth outfielder, but if his bat develops further, he has the tools to become an everyday outfielder.