The Milwaukee Brewers have been serious contenders in the NL Central Division now for the past several seasons and have come close to the World Series, but have yet to reach that pinnacle.

After losing to the Cardinals in game six of the NLCS last season, the Brewers were due for a downfall, especially with the loss of first baseman Prince Fielder to the Detroit Tigers.

The Brewers currently sit at 40-45, eight games out of first place and in fourth place.  Despite losing Prince Fielder, the Brew-Crew’s offensive production has been just fine. 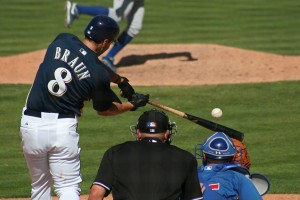 Ryan Braun is having another stellar season, hitting .306 with 24 home runs and 61 rbi.

Those numbers are MVP-like, but the Brewers would most likely have to win more for Braun to be considered for the award again in 2012.

With Fielder leaving town, Corey Hart has picked up the pace in his absence.  Hart has started 34 games at first base and 47 in right field, slugging 16 home runs and driving in 38 runs.

When Hart has not started at first base this season, the job has been left to Matt Gamel, Travis Ishikawa and Taylor Green.

That trio has combined for seven home runs and 33 rbi in a total of 225 at bats.

The big acquisition in the offseason for the Brewers,  third baseman Aramis Ramirez has put together a solid season.

If Ramirez can pick up his home run total and average slightly, he will be the exact player they thought they expected him to be.

Catcher Jonathan Lucroy has been sidelined with a broken hand since late May and still is a week or so away from returning to the lineup according to the Milwaukee Journal Sentinel.

In 43 games this season, Lucroy hit five home runs and drove in 30 runs.  In his absence, Martin Maldonado and George Kottaras have filled in nicely on offense, combining for eight home runs and 29 rbi.

The Brewers have considerably improved in stolen bases in 2012 with a total of 63 to this point.

Last season, the team totaled only 94 stolen bases throughout the entire season, which ranked them 12th in the NL.

Brewers starters have been good this season, with all starters not named Randy Wolf having an ERA under 3.75.  Wolf, 35, has had a season to forget to this point, registering a 5.80 ERA in 17 starts.

Overall, the Brewers rank 13th in the NL with a 4.24 ERA.  That number is due mostly to a bullpen that has been subpar by most standards.

Closer John Axford has struggled, including a 10 inning stretch in June which he carried a 9.00 ERA and three blown save opportunities.

If there is anywhere to point a figure at this season for the Brewers, it would have to be the Brewers bullpen.

The numbers shown above are just not acceptable for a team with postseason aspirations.

Without Prince Fielder and with one of the shakiest bullpens in the league, Milwaukee has their work cut out for them to join what has become a three-team race in the NL Central.

With Zack Greinke‘s contract up after this season, the Brewers will have to make a decision whether to try and improve this team in 2012 or build for coming seasons.

The stretch leading up to the trade deadline will be an important one for Brewers fans.