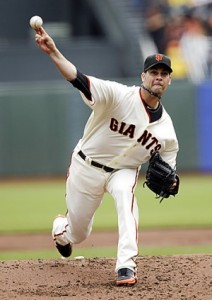 SAN FRANCISCO – Ryan Vogelsong pitched 7 shutout innings and Melky Cabrera homered as the San Francisco Giants blanked the Los Angeles Dodgers for the second time in as many nights, 2-0. both teams are headed in opposite directions, as the Giants have one 4 out of their last 5 games, and the Dodgers have lost out of their last 8 games.

Vogelsong (7-3) pitched into the 7th inning for the 14th consecutive time and lowered his ERA to a paltry 2.23. As is the norm, Giants’ nemesis Clayton Kershaw (5-4) was tough, allowing Cabrera’s homer and a single by Pablo Sandoval that scored Angel Pagan in the 4th. Santiago Castilla pitched a scoreless 9th for the save.

“It’s hard to do, especially against a good club,” Giants manager Bruce Bochy said. “Our pitching has been right on in this series. Vogey was tough today, good stuff, good command.”

The Giants look to break out the brooms today as Tim Lincecum takes the mound in the series finale versus the Dodgers’ Chad Billingsley.