Swiss National Bank lifted its holdings in shares of Unum Group (NYSE:UNM) by 0.5% during the 3rd quarter, according to its most recent disclosure with the SEC. The institutional investor owned 451,200 shares of the financial services provider’s stock after purchasing an additional 2,100 shares during the quarter. Swiss National Bank’s holdings in Unum Group were worth $11,307,000 as of its most recent filing with the SEC.

Unum Group (NYSE:UNM) last announced its quarterly earnings results on Tuesday, November 2nd. The financial services provider reported $1.03 EPS for the quarter, missing the Thomson Reuters’ consensus estimate of $1.16 by ($0.13). The company had revenue of $2.97 billion during the quarter, compared to analysts’ expectations of $2.96 billion. Unum Group had a net margin of 6.01% and a return on equity of 8.68%. During the same quarter in the prior year, the company earned $1.21 earnings per share. As a group, research analysts expect that Unum Group will post 4.3 earnings per share for the current fiscal year.

The firm also recently announced a quarterly dividend, which will be paid on Friday, February 18th. Stockholders of record on Friday, January 28th will be given a dividend of $0.30 per share. This represents a $1.20 dividend on an annualized basis and a dividend yield of 4.27%. Unum Group’s dividend payout ratio (DPR) is presently 30.77%.

Unum Group declared that its Board of Directors has initiated a share repurchase program on Monday, October 25th that allows the company to buyback $250.00 million in outstanding shares. This buyback authorization allows the financial services provider to purchase up to 4.4% of its stock through open market purchases. Stock buyback programs are usually an indication that the company’s management believes its stock is undervalued.

Unum Group is engaged in providing financial protection benefits. It operates through the following segments: Unum US, Unum International, Colonial Life, Closed Block and Corporate. The Unum US segment comprises of group long-term and short-term disability insurance, group life and accidental death and dismemberment products, and supplemental and voluntary lines of business.

Want to see what other hedge funds are holding UNM? Visit HoldingsChannel.com to get the latest 13F filings and insider trades for Unum Group (NYSE:UNM). 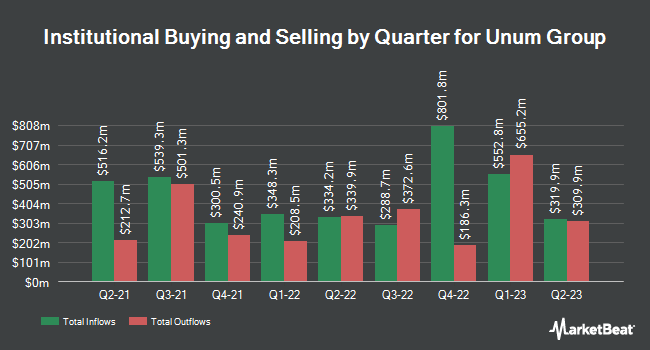 Complete the form below to receive the latest headlines and analysts' recommendations for Unum Group with our free daily email newsletter: