Nexstar Media Group (NASDAQ:NXST) posted its earnings results on Tuesday. The company reported $4.42 earnings per share for the quarter, beating the consensus estimate of $3.11 by $1.31, MarketWatch Earnings reports. The firm had revenue of $1.13 billion during the quarter, compared to analyst estimates of $1.13 billion. Nexstar Media Group had a net margin of 13.27% and a return on equity of 25.99%. The business’s quarterly revenue was up 3.7% on a year-over-year basis. During the same period in the previous year, the firm earned $3.30 EPS.

The firm also recently announced a quarterly dividend, which will be paid on Friday, May 28th. Stockholders of record on Friday, May 14th will be issued a dividend of $0.70 per share. This represents a $2.80 dividend on an annualized basis and a dividend yield of 1.88%. The ex-dividend date is Thursday, May 13th. Nexstar Media Group’s payout ratio is 55.56%.

Several equities analysts have recently weighed in on the stock. Zacks Investment Research lowered shares of Nexstar Media Group from a “buy” rating to a “hold” rating in a report on Tuesday. Wells Fargo & Company boosted their price target on shares of Nexstar Media Group from $143.00 to $170.00 and gave the stock an “overweight” rating in a report on Tuesday, March 2nd. One equities research analyst has rated the stock with a hold rating and six have given a buy rating to the company’s stock. The company has a consensus rating of “Buy” and an average price target of $138.00. 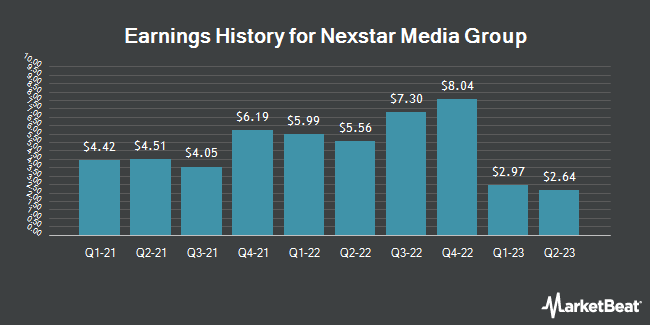 Complete the form below to receive the latest headlines and analysts' recommendations for Nexstar Media Group with our free daily email newsletter: