Kansas City Southern (NYSE:KSU) will issue its quarterly earnings data before the market opens on Friday, April 16th. Analysts expect the company to announce earnings of $2.05 per share for the quarter. Parties interested in participating in the company’s conference call can do so using this link.

Kansas City Southern (NYSE:KSU) last released its quarterly earnings data on Thursday, January 21st. The transportation company reported $1.89 earnings per share (EPS) for the quarter, missing analysts’ consensus estimates of $1.92 by ($0.03). Kansas City Southern had a net margin of 21.68% and a return on equity of 13.91%. The company had revenue of $693.40 million for the quarter, compared to the consensus estimate of $700.65 million. During the same quarter in the previous year, the firm posted $1.82 earnings per share. On average, analysts expect Kansas City Southern to post $7 EPS for the current fiscal year and $8 EPS for the next fiscal year.

The company also recently declared a quarterly dividend, which was paid on Wednesday, April 7th. Stockholders of record on Monday, March 8th were issued a $0.54 dividend. This represents a $2.16 dividend on an annualized basis and a dividend yield of 0.83%. This is an increase from Kansas City Southern’s previous quarterly dividend of $0.44. The ex-dividend date was Friday, March 5th. Kansas City Southern’s dividend payout ratio is presently 31.30%.

Kansas City Southern, a transportation holding company, provides domestic and international rail transportation services in North America. The company serves a ten-state region in the Midwest and southeast regions of the United States and has the shortest north/south rail route between Kansas City, Missouri, and ports along the Gulf of Mexico in Alabama, Louisiana, Mississippi, and Texas.

See Also: What are gap-up stocks? 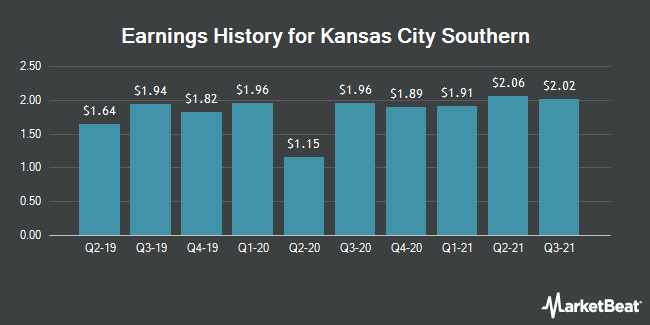 $247.87 Million in Sales Expected for CONMED Co. This Quarter

Complete the form below to receive the latest headlines and analysts' recommendations for Kansas City Southern with our free daily email newsletter: