Enter your email address below to get the latest news and analysts' ratings for Brown & Brown with our FREE daily email newsletter:

Shares of Brown & Brown, Inc. (NYSE:BRO) have earned a consensus recommendation of “Hold” from the nine brokerages that are currently covering the firm, MarketBeat Ratings reports. One research analyst has rated the stock with a sell rating, six have issued a hold rating and two have given a buy rating to the company. The average 12-month price objective among analysts that have issued a report on the stock in the last year is $40.17.

In other news, EVP Chris L. Walker sold 4,469 shares of Brown & Brown stock in a transaction that occurred on Thursday, February 20th. The shares were sold at an average price of $48.46, for a total value of $216,567.74. The transaction was disclosed in a legal filing with the Securities & Exchange Commission, which is accessible through the SEC website. 16.69% of the stock is currently owned by insiders.

Brown & Brown (NYSE:BRO) last announced its quarterly earnings results on Monday, January 27th. The financial services provider reported $0.28 EPS for the quarter, topping the Thomson Reuters’ consensus estimate of $0.27 by $0.01. The company had revenue of $579.00 million during the quarter, compared to analyst estimates of $563.56 million. Brown & Brown had a return on equity of 12.23% and a net margin of 16.66%. The firm’s revenue was up 13.8% on a year-over-year basis. During the same period in the prior year, the firm posted $0.27 earnings per share. As a group, sell-side analysts anticipate that Brown & Brown will post 1.54 earnings per share for the current fiscal year.

Featured Story: How do analysts define an oversold condition? 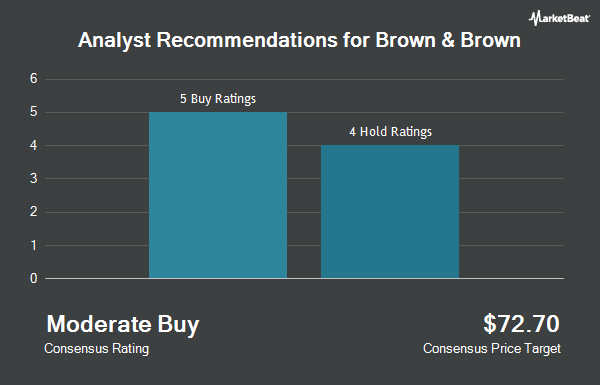