Enter your email address below to get the latest news and analysts' ratings for Entergy with our FREE daily email newsletter:

Entergy (NYSE:ETR) had its price target boosted by Wells Fargo & Co from $132.00 to $150.00 in a research report released on Thursday, The Fly reports. The firm currently has an overweight rating on the utilities provider’s stock.

Entergy (NYSE:ETR) last posted its quarterly earnings data on Wednesday, February 19th. The utilities provider reported $0.68 earnings per share for the quarter, topping the Thomson Reuters’ consensus estimate of $0.66 by $0.02. The company had revenue of $2.46 billion during the quarter, compared to analysts’ expectations of $2.98 billion. Entergy had a net margin of 11.57% and a return on equity of 11.02%. During the same period in the prior year, the company posted $0.60 earnings per share. Sell-side analysts anticipate that Entergy will post 5.58 EPS for the current fiscal year.

The business also recently declared a quarterly dividend, which will be paid on Monday, March 2nd. Investors of record on Thursday, February 13th will be given a $0.93 dividend. The ex-dividend date of this dividend is Wednesday, February 12th. This represents a $3.72 dividend on an annualized basis and a yield of 2.86%. Entergy’s dividend payout ratio is presently 68.89%.

Entergy Corporation, together with its subsidiaries, engages in the production and distribution of electricity in the United States. It generates electricity through gas/oil, nuclear, coal, hydro, and solar power sources. The company's Utility segment generates, transmits, distributes, and sells electric power in portions of Arkansas, Mississippi, Texas, and Louisiana, including the City of New Orleans; and distributes natural gas.

Featured Article: How to build a Fibonacci channel 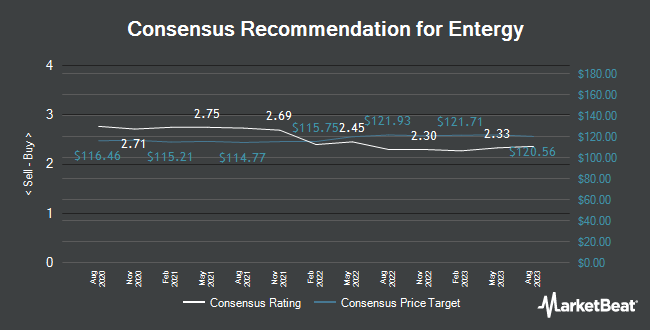 Receive News & Ratings for Entergy Daily - Enter your email address below to receive a concise daily summary of the latest news and analysts' ratings for Entergy and related companies with MarketBeat.com's FREE daily email newsletter.