Enter your email address below to get the latest news and analysts' ratings for The Western Union with our FREE daily email newsletter:

The Western Union Company (NYSE:WU) Director Jan Siegmund acquired 10,000 shares of the firm’s stock in a transaction dated Friday, February 14th. The stock was purchased at an average cost of $26.21 per share, with a total value of $262,100.00. Following the completion of the acquisition, the director now directly owns 10,000 shares of the company’s stock, valued at approximately $262,100. The acquisition was disclosed in a legal filing with the Securities & Exchange Commission, which can be accessed through this hyperlink.

The Western Union (NYSE:WU) last released its quarterly earnings results on Tuesday, February 11th. The credit services provider reported $0.38 EPS for the quarter, missing the Thomson Reuters’ consensus estimate of $0.43 by ($0.05). The Western Union had a negative return on equity of 475.84% and a net margin of 21.07%. The company had revenue of $1.31 billion for the quarter, compared to analysts’ expectations of $1.32 billion. During the same quarter last year, the company earned $0.49 EPS. Research analysts predict that The Western Union Company will post 1.77 EPS for the current fiscal year.

The business also recently declared a quarterly dividend, which will be paid on Tuesday, March 31st. Stockholders of record on Tuesday, March 17th will be paid a dividend of $0.225 per share. This represents a $0.90 annualized dividend and a dividend yield of 3.43%. The ex-dividend date is Monday, March 16th. This is a boost from The Western Union’s previous quarterly dividend of $0.20. The Western Union’s dividend payout ratio is 41.67%.

About The Western Union 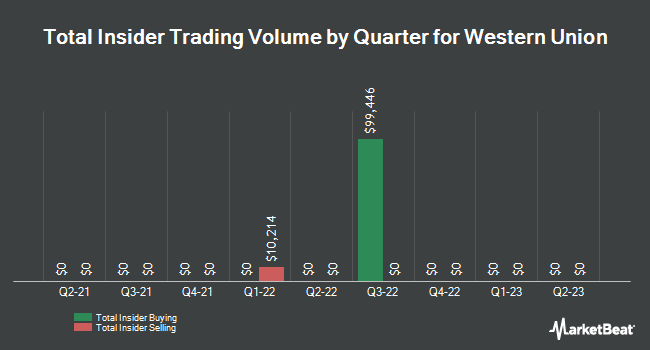