Enter your email address below to get the latest news and analysts' ratings for Monro with our FREE daily email newsletter:

Equities analysts predict that Monro Inc (NASDAQ:MNRO) will report sales of $337.33 million for the current quarter, Zacks Investment Research reports. Four analysts have issued estimates for Monro’s earnings, with the lowest sales estimate coming in at $331.82 million and the highest estimate coming in at $343.20 million. Monro posted sales of $310.11 million in the same quarter last year, which suggests a positive year over year growth rate of 8.8%. The firm is expected to report its next earnings results on Thursday, January 30th.

According to Zacks, analysts expect that Monro will report full-year sales of $1.30 billion for the current fiscal year, with estimates ranging from $1.28 billion to $1.31 billion. For the next year, analysts forecast that the business will post sales of $1.39 billion, with estimates ranging from $1.38 billion to $1.41 billion. Zacks’ sales averages are a mean average based on a survey of research firms that that provide coverage for Monro.

Monro (NASDAQ:MNRO) last released its quarterly earnings results on Thursday, October 24th. The auto parts company reported $0.60 EPS for the quarter, missing analysts’ consensus estimates of $0.71 by ($0.11). Monro had a return on equity of 11.41% and a net margin of 6.48%. The business had revenue of $324.11 million for the quarter, compared to the consensus estimate of $330.07 million. During the same period in the prior year, the business posted $0.65 earnings per share. Monro’s revenue was up 5.5% compared to the same quarter last year.

In related news, Director Peter J. Solomon sold 5,500 shares of the stock in a transaction that occurred on Monday, November 4th. The shares were sold at an average price of $70.86, for a total value of $389,730.00. The sale was disclosed in a filing with the Securities & Exchange Commission, which is available at this hyperlink. In the last three months, insiders sold 13,104 shares of company stock valued at $941,046. 4.40% of the stock is owned by insiders.

Monro, Inc provides automotive undercar repair, and tire sales and services in the United States. The company offers range of services on passenger cars, light trucks, and vans for brakes; mufflers and exhaust systems; and steering, drive train, suspension, and wheel alignment. It also provides other products and services, including tires and routine maintenance services, including state inspections.

Further Reading: What is a death cross? 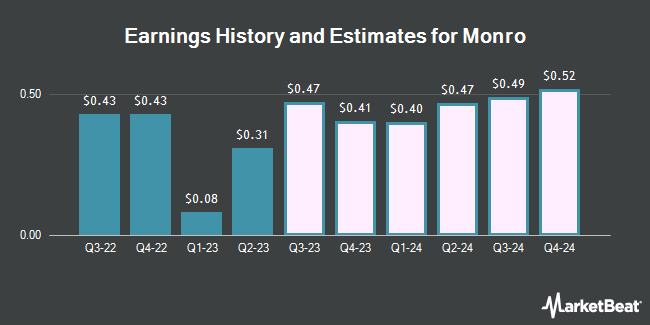 Receive News & Ratings for Monro Daily - Enter your email address below to receive a concise daily summary of the latest news and analysts' ratings for Monro and related companies with MarketBeat.com's FREE daily email newsletter.