Enter your email address below to get the latest news and analysts' ratings for Amicus Therapeutics with our FREE daily email newsletter:

Amicus Therapeutics, Inc. (NASDAQ:FOLD) has been assigned an average rating of “Buy” from the ten brokerages that are covering the stock, Marketbeat.com reports. One investment analyst has rated the stock with a hold recommendation and nine have given a buy recommendation to the company. The average 1-year target price among brokers that have covered the stock in the last year is $17.82.

Amicus Therapeutics (NASDAQ:FOLD) last released its earnings results on Monday, November 11th. The biopharmaceutical company reported ($0.24) earnings per share (EPS) for the quarter, topping the Thomson Reuters’ consensus estimate of ($0.32) by $0.08. Amicus Therapeutics had a negative net margin of 216.02% and a negative return on equity of 62.61%. The company had revenue of $48.80 million during the quarter, compared to analyst estimates of $48.05 million. During the same period in the prior year, the firm posted ($0.84) EPS. The firm’s quarterly revenue was up 136.9% compared to the same quarter last year. On average, research analysts predict that Amicus Therapeutics will post -1.27 earnings per share for the current fiscal year.

Amicus Therapeutics, Inc, a biotechnology company, engages in the discovery, development, and commercialization of medicines for various rare and orphan diseases. The company offers Galafold, an orally administered small molecule pharmacological chaperone for the treatment of Fabry disease. It is also conducting a Phase 1/2 clinical study of ATB200-02 for indications, including pompe disease.

Recommended Story: How to build a Fibonacci channel 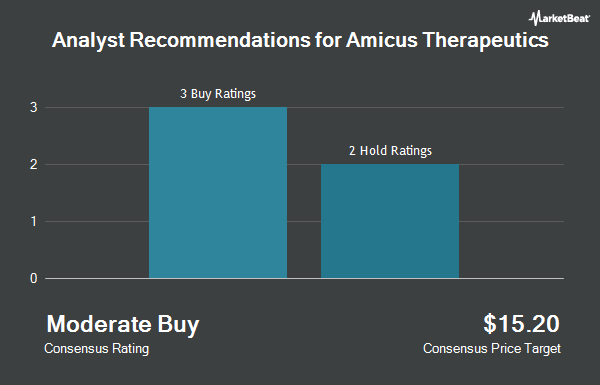