Enter your email address below to get the latest news and analysts' ratings for Star Bulk Carriers with our FREE daily email newsletter:

According to Zacks, analysts expect that Star Bulk Carriers will report full-year earnings of $0.13 per share for the current fiscal year, with EPS estimates ranging from $0.12 to $0.14. For the next year, analysts anticipate that the company will post earnings of $2.73 per share, with EPS estimates ranging from $2.54 to $2.92. Zacks Investment Research’s EPS averages are an average based on a survey of sell-side research analysts that follow Star Bulk Carriers.

Star Bulk Carriers (NASDAQ:SBLK) last announced its earnings results on Wednesday, November 20th. The shipping company reported $0.18 earnings per share (EPS) for the quarter, topping analysts’ consensus estimates of $0.17 by $0.01. The company had revenue of $248.44 million for the quarter, compared to analyst estimates of $215.35 million. Star Bulk Carriers had a positive return on equity of 1.24% and a negative net margin of 3.50%.

The firm also recently declared a quarterly dividend, which will be paid on Monday, December 16th. Investors of record on Monday, December 2nd will be given a dividend of $0.05 per share. This represents a $0.20 annualized dividend and a yield of 1.87%. The ex-dividend date is Friday, November 29th. Star Bulk Carriers’s payout ratio is 18.02%.

Star Bulk Carriers Corp., a shipping company, engages in the ocean transportation of dry bulk cargoes worldwide. Its vessels transport a range of major bulks, including iron ores, coal, and grains, as well as minor bulks, such as bauxite, fertilizers, and steel products. As of April 10, 2019, the company had a fleet of 109 vessels with an aggregate capacity of approximately 12.45 million deadweight ton, including 17 Newcastlemax, 19 Capesize, 2 Mini Capesize, 7 Post Panamax, 35 Kamsarmax, 2 Panamax, 17 Ultramax, and 10 Supramax vessels. 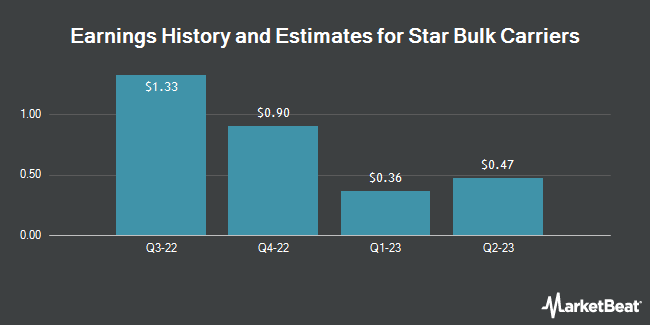