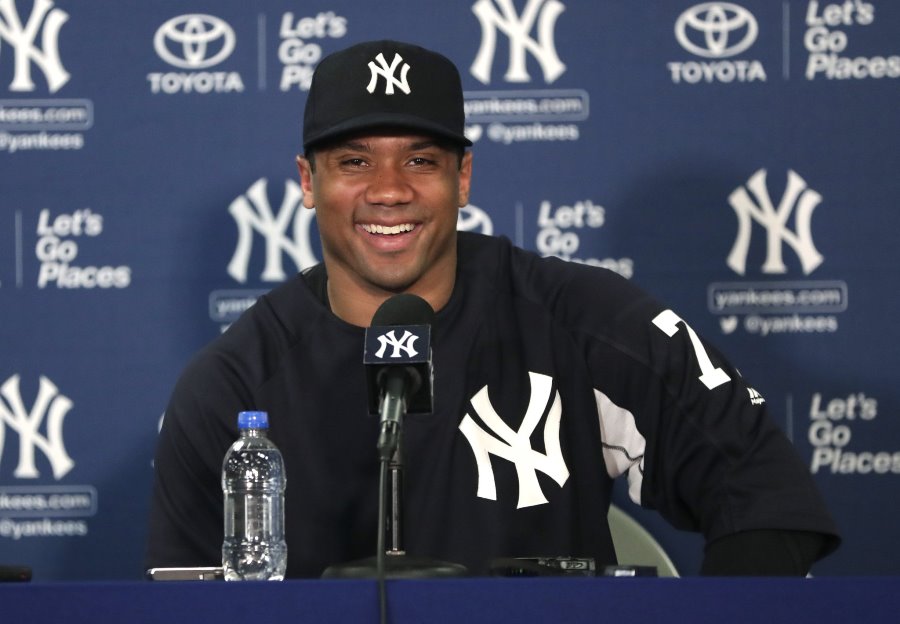 Russell Wilson’s childhood dreams came true on Monday when the reported to the spring training facility of the New York Yankees and wore pinstripes for just the first time.

The Seattle Seahawks Super Bowl-winning quarterback is scheduled to spend five days at the facility with the Yankees following a trade last week in which he was sent to New York by the Texas Rangers.

The highlight of the arrival of Wilson came as Group 2 at batting practice for the Yankees took its turn. Wilson joined the Yankees top sluggers Aaron Judge, Giancarlo Stanton, Greg Bird and Gary Sanchez for living hitting.

Unofficially the group was paced by the 15 home runs by Stanton, while Judge hit 10 and Bird eight. Wilson was able to join the leaderboard hitting six homers to the five of Sanchez.

Wilson said the batting session was his first in a while, but he added that baseball for him is like riding a bike, but it is difficult. Wilson has been enjoying his time being around baseball again.

He called this one of the most enjoyable thing’s he has done and donning a pinstripes jersey for the first time was great. Wilson added that since he was a youngster he always dreamed of playing for the Yankees. He watched them all the time and at the time Derek Jeter was his favorite player.

Harrison Wilson III, the late father of Wilson, was a Yankees fan his entire life, before he died during 2010, Wilson’s father hoped his son, highly talented in more than one sport, might play for his favorite team one day.

Wilson will not play any Yankees games during spring training, but is on the team’s roster. Yankees manager Aaron Boone has said that the primary duty of Wilson is to enjoy his time with the team.

Prior to entering the batting cage, Wilson took ground balls while at second base working on throws to first and turning the double-play with Didi Gregorius the Yankees shortstop.

New acquisition Brandon Drury grew up in Oregon and is a Seahawks fan. He says that Wilson is a winner and whether it is playing baseball or off the field he is smart, cares and studies the game.

Wilson played his college baseball at North Carolina State and in 2010 was drafted during the fourth round by the Colorado Rockies. He was acquired by the Texas Rangers in 2013 from Colorado.