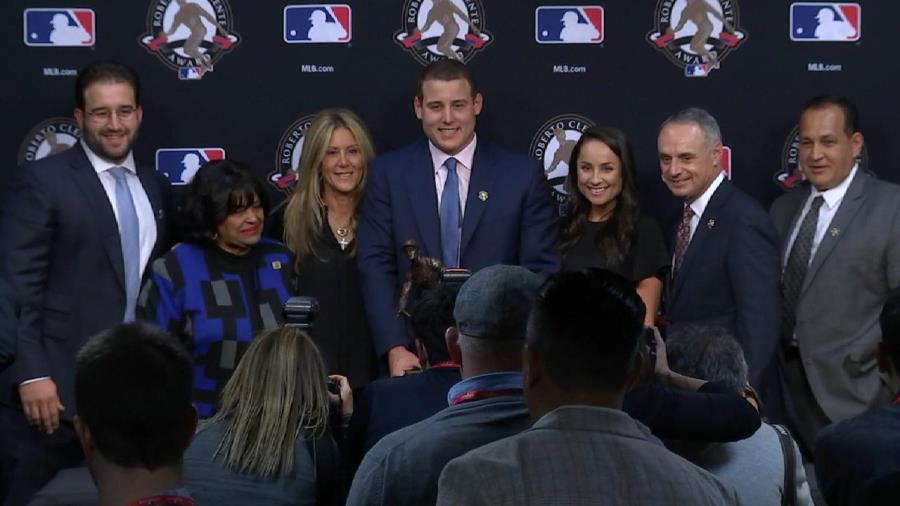 The charitable contributions as well as involvement with patients that have pediatric cancer, has earned Chicago Cubs first baseman the 2017 Roberto Clemente Award, one of baseball’s most coveted individual awards.

The award is named after the late Roberto Clemente a former star outfielder with the Pittsburgh Pirates and a member of the Baseball Hall of Fame, and is for a player that represents extraordinary character, philanthropy, positive contributions and community involvement both on the playing diamond and off it.

Rizzo, who is 28, is a Hodgkin lymphoma survivor from earlier in his pro career. He created the Anthony Rizzo Family Foundation that supports children that are fighting cancer, helps their families and funds research for cancer.

Rizzo was given the award on Friday night prior to the start of the World Series Game 3 between the Dodgers and Astros.

Rizzo said that obviously with all that Roberto did, he set the bar high for athletes, especially us baseball players, in the charitable work he performed, and all he gave back.

Rizzo became the third member of the Chicago Cubs to receive the coveted award following Rick Sutcliffe from 1987 and Sammy Sosa during 1998.

Rizzo gave thanks to Tom Ricketts the Chairman of the Cubs for setting a tone for Cubs players to become involved in charitable activities.

The Rizzo foundation in 2017 committed over $4 million to establish the program Hope 44 at Chicago’s Ann & Robert Lurie Children’s Hospital, and Rizzo has been a huge fixture there the past five years visiting children who are battling with cancer.

Rizzo is involved as well with cancer centers in Hollywood, Florida, Miami, Florida and with Gilda’s Club Chicago.

The Cubs’ star said he can remember how it felt back in 2008 when he was given the diagnosis of cancer while in Class A  playing in the Boston Red Sox farm system.

He said that he learned what it meant to remain positive for family members and said that visiting the kids that are fighting cancer helps to keep him motivated.

Recently Mia, a young girl Rizzo met at Lurie’s Children’s hospital died. He posted photos of the two of them on social media and called her a warrior.

He said that lives are being saved and donations are really helping, but when one patient is lost, it is not easy dealing with it.