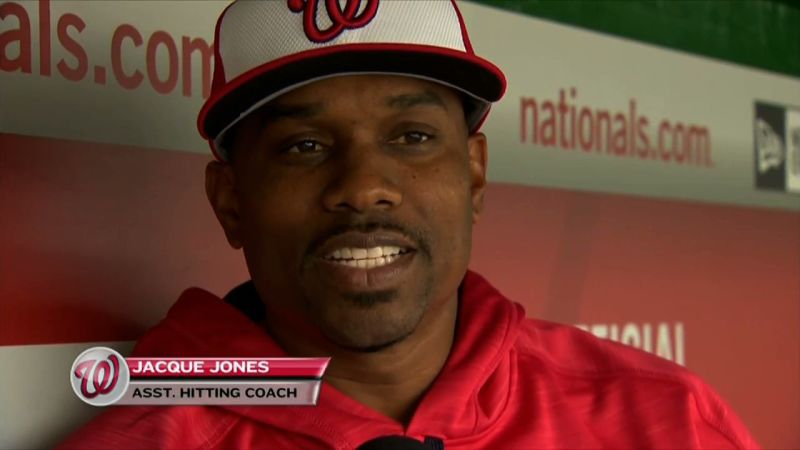 Minutes prior to the Washington Nationals National League Division Series Game 1 at home against the Chicago Cubs, the team announced that it had suspended Jacques Jones the team’s assistant hitting coach due to a legal matter.

According to this suit, which was filed in San Diego last week, Jones is alleged to have distributed several nude photos of Jane Doe, the plaintiff, not named in the suit, after the relationship between Jones and the woman had ended during August.

On Friday, the Nationals were served, said an attorney for the ex-girlfriend of Jones.

Court documents show that Jones allegedly wrote to a friend on Facebook asking if his ex-girlfriend wanted the accompanied images back,

Robert Fitzpatrick, an attorney representing the plaintiff, alleges in the complaint that Jones continued distributing the images to additional mutual friends and that he was punishing her due to ending the couple’s relationship.

An email received by an attorney for the plaintiff, said she was seeking justice for the emotional abuse and intimidation of Jones in connection with the distributing of privates photos that were also intimate of the plaintiff while working for the Washington Nationals.

Dusty Baker the manager of the Nationals said the suspension of Jones was a downer, adding that Jones was a big part of the club. Baker added, following the Game 1 3-0 loss to Chicago that he hoped things subsided and could be worked out.

The lawsuit claims as well that the Nationals were aware of the predisposition and propensity of Jones to intimidate and emotionally abuse women.

When an attorney for the plaintiff was contacted, he said that the Nationals had failed to investigate, failed in training and improperly had retained Jones even after knowing or should have been aware of his bad conduct toward women.

The lawsuit also said that Jones’ ex continues experiencing severe embarrassment, emotional distress, and physical manifestations of pain that include vomiting when thinking of the actions carried out by Jones.

Jones played in the majors for 10 seasons and this is the second year he has been with the Nationals as the assistant hitting coach.

The lawsuit is seeking $25,000 with the first hearing scheduled for March 9.