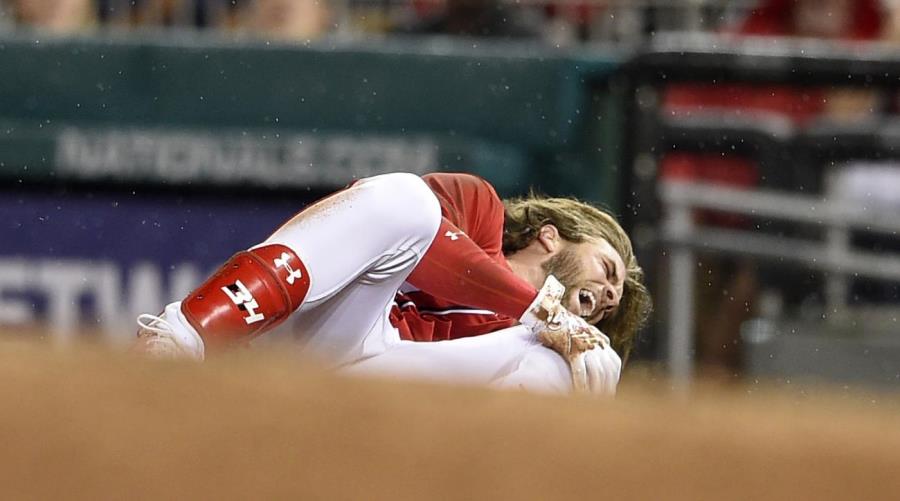 On Monday, Washington Nationals star Bryce Harper may come off his team’s disabled list and play for the National League East champions when they open a series on the road in Philadelphia.

Nationals’ manager Dusty Baker said the team was trying to make a decision about if Harper would return on Monday and said nothing would be said until later on Monday.

Harper has not played since August 12 when he suffered a bone bruise to his knee when he slipped running out a ground ball. Prior to being hurt, the Nationals slugger had been hitting .326 with 29 homers and 87 RBIs over 106 games.

Max Scherzer the ace for the Washington pitching staff said that when you add Harper’s bat to the team’s lineup it makes is scary good.

Scherzer added the team can score runs with all the top teams with that kind of lineup and everyone on the club is looking forward to Harper returning to form as soon as he can.

The Nationals have clinched the NL East and have home field advantage in their best of five Division Series beginning on October 6.

However, there is still one week left in the 2017 regular season and Harper could use it to test out his knee and become comfortable once again at the plate prior to the start of the postseason.

While the worst fears of the club were ruled out through medical exams, the star has not played the last 41 games for the Nationals.

Scherzer said his teammate was likely very anxious to get on the field and play and hopefully he will return and find his timing at the plate, which is likely going to be the most difficult thing for him to do.

If the former NL MVP returns, Washington will then have every player who was in its lineup on Opening Day except for Adam Eaton an outfielder, who suffered a season ending injury April 29.

With the minor league seasons over already, Harper can only rehab in the instructional league, which starts Monday.

The outfielder, who has been an All Star give times, took batting practice last Friday and took part in a simulated game on Saturday facing two pitchers from the minor leagues.

Harper on Saturday said that the most important thing for him was trying to see where he had his timing and how it felt. It takes time, said Harper to return to form at the plate.