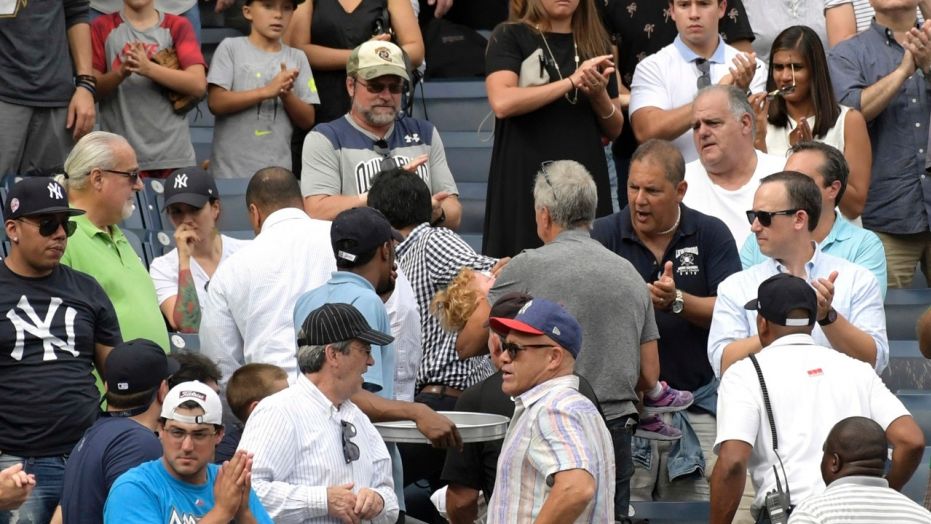 On Wednesday, at Yankee Stadium a young female fan was hit by a foul ball estimated to be traveling 105 miles per hour. The foul ball came off the bat of Yankees third baseman Todd Frazier in the Yankees game with Minnesota.

The incident has led to some players calling for the protective netting at the park to be increased.

The Yankees announced that the girl had been taken to a nearby hospital to be treated, and Joe Girardi the manager of the Yankees said he was told by a member of the team’s security that the girl was OK.

The game experienced a delay of only 4 minutes in which time the girl was attended to by paramedics then carried from her seat to a waiting ambulance during New York’s half of the fifth inning.

Frazier was notably shaken following the incident and could be seen crouching down with his hands covering his face. The third baseman for the Yankees then bowed his head and slowly walked away from home plate, crouched one more time and just rested his head on his bat.

Frazier told reporters after the game that he instantly thought of his own kids as he has two children who are less than 3 years of age. He hoped the young girl was all right.

Frazier added that he knew the dad or whoever the man was with the girl was trying to protect her but when a ball comes off the bat at such speed and is curling on its way to the stands it is difficult to stop let alone deflect away from someone.

Aaron Judge the New York Yankees rookie slugger said that he believed there should be additional netting extended from where it currently ends.

Twins players were distressed as well. Minnesota second baseman Brian Dozier and Matt Holliday, a DH for the Yankees both had tears in their eyes while saying prayers near second base.

Dozier said the players have tried to get teams to put up nets. He added that it was too dangerous that close to have kids and not any netting to protect them. He went on to say that every stadium should have nets and said the view of the fans did not matter to him because it was about safety and nothing else.

Eduardo Escobar, said through a translator that he saw the girl bleeding. The Twins infielder said that perhaps children who are under a specific age should be prohibited from sitting in seats that are not protected.