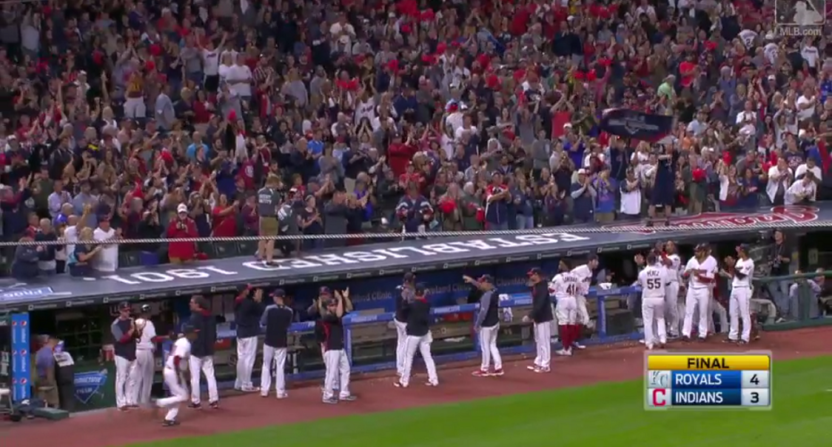 The Cleveland Indians winning streak of 22 straight games was ended Friday night by the Kansas City Royals. The Indians lost for the first time since August 23.

The winning streak did not end with any dramatic or fingernail biting finish. Kansas City beat Cleveland 4-3 in Cleveland at Progressive Field accomplishing what five other Major League Baseball teams could not since the Red Sox beat them August 23.

During the streak, the Indians played phenomenally outscoring their opponents by a combined 106 runs. That is an average of almost 5 more runs per game. The Indians posted 7 shutouts of the 22 wins and hit 41 homes run, while holding opponents to 35 total runs or an average of 1.6 per game.

Friday’s game ended with Cleveland’s Francisco Lindor at bat, only about 24 hours after he had extended the streak to another night when the team down to its final strike with an RBI double that forced the game into extra innings.

On Friday, the tying run was on base, but Lindor struck out swinging to end the game and winning streak.

However, the Cleveland fans showed their appreciation of their team’s accomplishment and all 34,000-plus rose in unison and saluted the teams with a standing ovation, which was returned by the players.

The Indians used exceptional pitching and great hitting to win the 22 straight games. Trevor Bauer one of the team’s top starters is 16-9 on the season and was not upset when taken out with the score tied 3-3, with one baserunner.

His replacement Joe Smith, who had five holds and one save during the streak, allowed the go-ahead RBI on a single to Royals’ Lorenzo Cain.

The late season winning streak has elevated the Indians to favorites to win the World Series. The poor run during the same period by the Los Angeles Dodgers has made it easier for odds makers to move the Indians above the Dodgers.

Other numbers of note during the streak were the Indians trailed in only 9 of 199 innings, the starting rotation earned 19 wins with Corey Kluber and Bauer winning four each, the team ERA was 1.58 and the strikeout to walk ratio was 200 to 37.

Vail Resorts Raised to B- at TheStreet