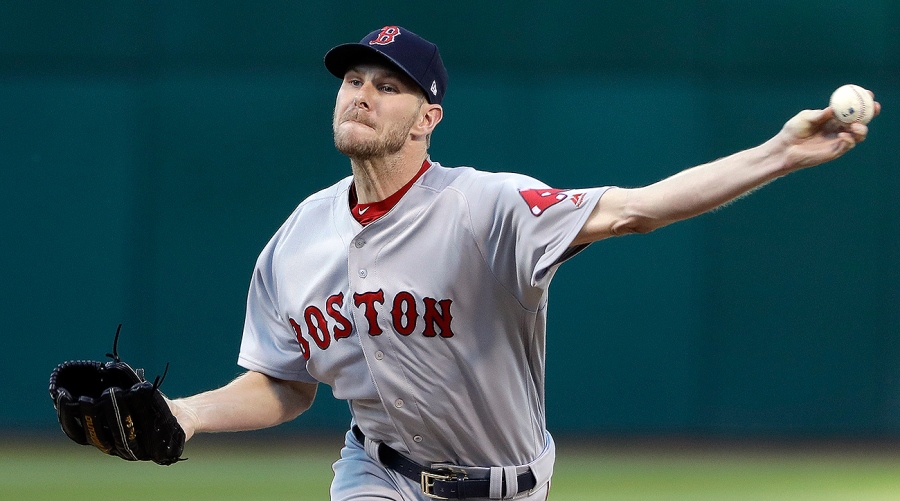 The pitch was a 96-mph fastball that hit the outer part of the strike zone and Kole Calhoun flailed at it as it struck the catcher’s mitt. The last pitch for Chris Sale the new ace for the Boston Red Sox was as nasty as his first on Friday night against the Los Angeles Angels.

The sixth inning strikeout was part his shutout six innings pitched and for his effort Sale was rewarded with a 6-2 win over Angels.

In addition, the sixth inning strikeout was the 200th for Sale this season in just his 20th start. That put the southpaw ace for Boston in a group that included Nolan Ryan, Pedro Martinez and Randy Johnson – all Hall of Famers – as the only four pitchers to strikeout that number of hitters in 20 starts or less.

However, the dominance by Sale is much more historic. He tossed his 200th strikeout in only 141 1/3 innings pitched, which is less than any pitcher in the American League in a season. Johnson reached 200 strikeouts in 143 innings, while Martinez needed 147 innings to reach 200.

John Farrell the manager for the Red Sox said he has never been around any pitcher with those kinds of numbers.

Sale is so unique that Boston gave him an additional day of rest prior to starting him on Friday against Los Angeles.

Sale leads the AL in innings pitched with many of them in games that are high-stress and low scoring and has averaged 110 pitches per game.

Boston this season has not given Sale much run support, but Friday’s game was different as the team built a 5-0 lead in the top of the first. Much different from last Saturday, when Sale threw 7 2/3 innings of shutout baseball leaving with a 1-0 lead, only to watch the Boston bullpen give up a ninth inning home run.

Sale has now won 11 of his last 12 decisions, struck out 10 batters or more in 14 of his 20 starts and has pitched through the seventh inning 15 times.

However, the historical context of his season does not matter that much to Sale at this point.

Sale has agreed to the plan of manager Farrell to give him one day extra of rest when possible. With the Red Sox leading the AL East, Farrell can pick and choose his spots to rest the southpaw ace.

Sale has not allowed a run in his last 13 2/3 innings since the break for the All-Star Game and has shutout opponents three of his last four starts.