Rangers Adrian Beltre Ruled Out for Game 2 of ALDS 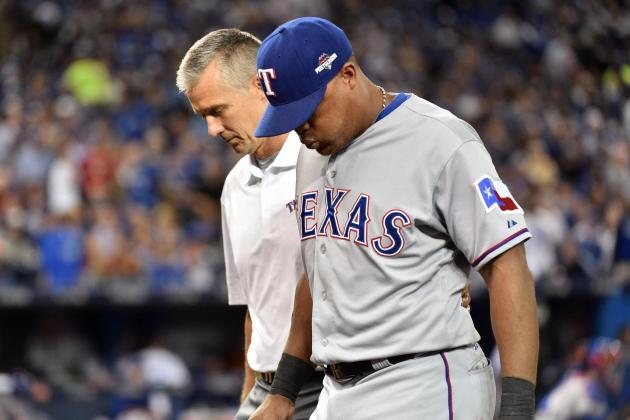 Texas Rangers third baseman Adrian Beltre has been ruled out for Friday’s Game 2 of the AL Division Series after suffering a back strain during the series opener. Beltre was hurt in the first inning of Thursdays 5-3 win over the Toronto Blue Jays.

The loss of Beltre even for one game is significant. Beltre hit .287 with 18 homers and 87 RBIs this season. His two-out single in the third gave the Rangers a 2-0 lead over David Price and the Blue Jays.

Beltre will get treatment for his back strain today and be reevaluated.

“There is some improvement,” manager Jeff Banister said. “I’ve seen him walking around; to me that’s an improvement. Yesterday, he was putting one foot in front of another, if you want to call it walking, you can call it walking.”

Hanser Alberto will play third base and bat night for the Rangers today and Elvis Andrus will move up to the five spot.  Rougned Odor goes from eighth to seventh and Chris Gimenez, who catches Cole Hamels, goes from ninth to eighth.

The Rangers could replace Beltre on the roster. But, according to postseason roster rules, that would mean he would have to sit out the American League Championship Series as well.

“That would be the last option,” said Rangers GM JonDaniels. “The news would have to be worse than it is right now for us to consider that. We’ll wait and see. Hopefully he’ll get treatment this evening at the hotel, get some sleep, get back in tomorrow and we haven’t ruled him out of tomorrow’s game at this point. We’ll take it day to day. We’ve got the off-day Saturday, so we’ll take it day to day and see where we go.”