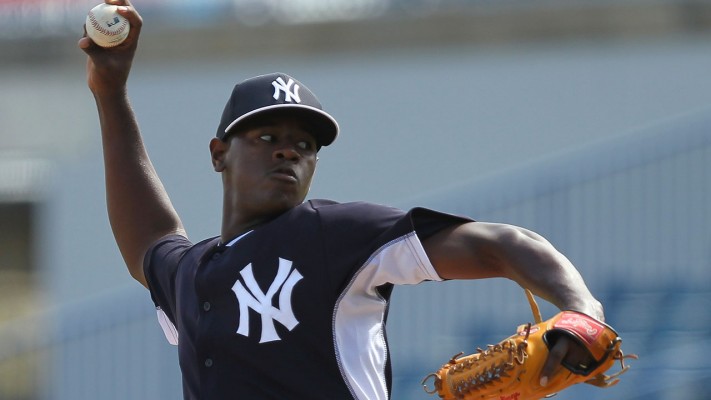 The New York Yankees may have struck out at the trade deadline but plan to impose its biggest transaction with itself by calling up top prospect, Luis Severino, to debut on Thursday. Severino, will be added to a rotation suddenly with a lot of question marks surrounding itself.

CC Sabathia has reverted back to major struggles, most recently getting shelled by Texas on Thursday. Ivan Nova and Masahiro Tanaka have been inconsistent and Michael Pineda will be out at least a month with a strained forearm. Severino will take Pineda’s spot in the rotation.

He will also look to add stability and potential upside as a playoff presence. In AAA this season, the righty posted a 7-0 record with a 1.91 ERA in 11 starts. Severino’s final minor league start included six shutout innings, one hit and 10K.

Most recently rated the 13th best prospect in the majors, Severino is one of the highest ranked Yankees’ pitching prospects ever, and the highest since Phil Hughes was 4th after the 2006 season (but that was when he was only in A ball). Andy Pettitte, for comparison’s sake, was never better than 49th during his call up season in 1995.

At 99 innings on the season (split between AA and AAA), a cap on Severino’s workload might be a minor concern as he has never surpassed 113 innings in a year. Realistically, he will be on a limit somewhere under 150 innings, including the postseason, which allows for roughly 6-8 starts if he is to make a potential playoff roster whether as a starter or reliever. With no pitching additions at the deadline, the move made sense for New York when considering Severino’s success this season.

The Yankees will find out a little later than usual how the trade deadline panned out.