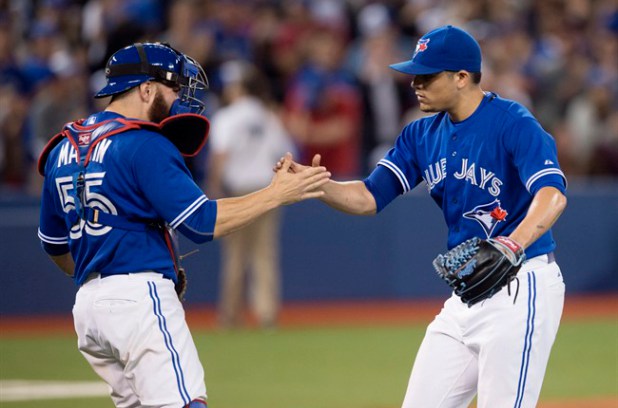 As the Major League Baseball season reaches towards  the July 31st trade deadline, the Toronto Blue Jays remained in the hunt for their first playoff berth since claiming back-to-back World Series titles in 1992 and 1993.

The Jays have regularly demonstrated their dominance at the plate this season, leading the majors with over 5.2 runs per game this year. But while the Blue Jays have had little difficulty running up the score, the club has struggled at times on the mound, leading to calls from fans and baseball writers alike for general manager Alex Anthopoulos to pull the trigger on a deal to bolster the club’s besieged starting rotation.

In his sixth season as Blue Jays GM, and in the final year of his current contract, Anthopoulos has come under increasing pressure to win now, following disappointing finishes in each of the last three seasons.

With a minor league system well stocked with young, talented pitching prospects, the rumor mill has been abuzz since early in the season with potential deals that would eventually land the club its long sought after ace.

But with the Blue Jays continuing to struggle to keep their record above .500 and gain on the surprising New York Yankees in the AL East standings, the club’s short- and long-term goals may be better met by resisting the urge to move out young pitching talent that looks to be on the verge of making the jump to the majors and could make Toronto a contender for the remainder of the decade.

Veteran hurler Mark Buerhle has been the anchor of the Jays’ staff this season, posting an 11-5 record and 3.29 ERA through the final weekend of July. Buerhle is joined by 2012 NL Cy Young Award winner RA Dickey, who has pitched well this season, but with a lack of run support has amassed a disappointing 4-10 record entering the final days of July.

However, with both veterans expected depart Toronto this winter, a hasty deal to move prospects for short-term pitching help could impact the team’s competitiveness as soon as next season.

A pair of youngsters making their mark this season provide a glimpse of what may await long-suffering Blue Jays fans.

Roberto Osuna, a hard-throwing 20 year-old, has impressed since being thrust into the role of closer. With a four-seam fastball clocked at upwards of 96 MPH, Osuna has looked solid in 42 appearances through the final Sunday in July, posting his fifth save of the season in an 8-6 win over Seattle on July 25.

Osuna is joined on the roster by 23 year-old Aaron Sanchez. The right-hander posted a 6-4 record and 3.44 ERA through 11 starts before going down with a shoulder strain in June, but has looked in fine form in a pair of bullpen appearances since returning to action on July 25.

Another 20 year-old, Miguel Castro, also looks to be on the fast track tom the major leagues. The 6′ 5” right-hander showed flashes of his immense potential in 13 appearances early this season before being returned to AAA Buffalo, where he has posted a 3.09 ERA in five starts.

The subject of the most trade chatter has surrounded leftie Daniel Norris. Ranked No. 2 among southpaw pitchers in MLB’s 2015 Prospect Watch, Norris started the season with Toronto, compiling a 1-1 record through five starts before being shipped to AAA Buffalo in what has proven to be an unpopular move among Jays fans.

Added to a young rotation that already includes 24 year-old Drew Hutchison and veteran Marco Estrada, the Jays have the makings of a dominant pitching staff as early as next spring, giving them plenty of reason to stand pat down the stretch of the 2015 season.