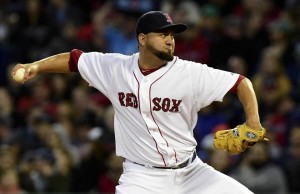 Following Wednesday night’s debacle that saw Red Sox pitching issue nine walks in a 5-3 loss to Tampa Bay, Boston general manager Ben Cherington made two moves to address a pitching staff that is last in the American League in most statistical categories, including a 4.86 ERA. The club dismissed pitching coach Juan Nieves. In addition, right-handed reliever Edward Mujica was designated for assignment, according to WEEI.com.

Nieves, a former Major League pitcher who authored a respectable track record as bullpen coach with the Chicago White Sox, guided a pitching staff that registered a 3.79 ERA during Boston’s 2013 season which ended with a World Series title.  So far in 2015, though, the club has staggered to a 13-15 start, a mark that can be mostly attributed to ineffective outings by the rotation and the bullpen.

The Red Sox are expected to recall pitching prospect Matt Barnes, whose long-term future could be in the rotation but has a power arm that is currently needed in the bullpen. He is eligible to return to the Major League roster after being optioned to Pawtucket in late April.

Cherington’s next move will likely target the starting rotation. Top prospect Eduardo Rodriguez is the prime candidate to replace an existing starter. Justin Masterson is the current Red Sox starter most vulnerable to moving to the bullpen or being designated for assignment.