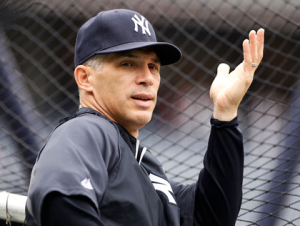 It seemed like such a dismal failure, but the New York Yankees actually finished as the second best team in the American League East last season. We discovered: Masahiro Tanaka, Dellin Betances and what Brett Gardner‘s power looks like. We said goodbye to: Brian Roberts, Alfonso Soriano and, by the end, Dave Robertson and Hiroki Kuroda. By the end, we were excited about: Jacoby Ellsbury, Michael Pineda and Chase Headley and disappointed in: Brian McCann, CC Sabathia and Carlos Beltran.

There were a lot of moving parts, ups and downs and most of all, injuries, but the Yankees’ finished 84-78, still above .500 at home and on the road, still in second place and still not in the postseason. So will that be the outcome again this year? Have the Yankees graduated into the 90+ win club, or, in last season’s case, the 88 win club, it would take to potentially make the playoffs? Have they regressed? Are we in store for the sub .500 season we’ve heard about since 2012? Here’s a look at what would have to happen for the Yankees to finish in each place of the American League East:

There was a big gap between the Yankees in second and winning the division. The Baltimore Orioles won 96 games last season and finished just two games away from home field advantage throughout the playoffs. The team lost Nick Markakis and Nelson Cruz, but gain Manny Machado and Matt Wieters, who were both hurt and are both still in their primes. It’s conceivable the Orioles are poised to win in the mid 90’s again, which means the Yankees have to be at least 10 games better than last season. So what does that look like?

It means Tanaka never ended up missing the year with elbow troubles. It means Headley picked up where he left off, Ellsbury and Gardner had repeat seasons and the Garrett Jones and Mark Teixeira combo at first actually turned out to be pretty nice. It means, Sabathia and Nova came back and contributed, Pineda made more than 25 starts and Nathan Eovaldi was the type of arm the Yankees anticipated. In a nutshell? The Yankees’ rotation stayed healthy enough, Beltran and Alex Rodriguez made a formidible DH platoon (keeping Beltran in the lineup more) and the middle of the infield (Didi Gregorius and Stephen Drew or whoever replaces him) were not as invisible as the middle infield last season.

Basically, with a much younger roster, the Yankees had some older guys to step up in lesser roles (Tex, A-Rod, Beltran, Sabathia), the few highlights carried over into similar seasons (Betances, Gardner, Ellsbury and Headley) and the young guys proved themselves (Eovaldi and Gregorius). It will take everything to outright win this division.

If the Yankees finish in second place it may be more about the other teams in the division than their own improvements. While it could turn out the Yankees and Orioles were in an arms race to the top and the Orioles won by a little in the end, it’s more realistic the Yankees are in its first real transition year towards becoming an annual contender and some things didn’t go favorably.

The Red Sox and its rotation of middle of the pack starters didn’t exceed expectations and a couple of them even were hurt. The lineup was solid, but the team just couldn’t get over the hump, surrendering 4+ runs every other game and relying too heavily on the bullpen.

The Rays traded most of its MLB talent, lost its manager and GM, lost David Price at the deadline and didn’t have the same A+ prospects it’s had since 2008 to keep the movement going. Not only did the Rays have to be as good as last season with even less brand names and new leadership, but they had to make up seven games in the standings had the Yankees not improved from 2014. They didn’t.

That leaves the Blue Jays, who finished just one game behind the Yankees last season, added Josh Donaldson and Russell Martin into an already solid lineup and have Aaron Sanchez and Marcus Stroman for a full season. Unfortunately, the rotation was too unproven and the bullpen wasn’t good enough.

The Yankees were a viable threat because its lethal rotation was good enough and bullpen and the bullpen covered a lot of mistakes and low-scoring games from a shoddy offense. The Jays, however, though won some slug fests, didn’t get consistent and healthy enough pitching to leap frog the Yankees, and stayed right in the perpetual 80-something win category they seem destined to stay in forever.

The Blue Jays or the Red Sox, one trending up, the other one winning the offseason in the division, leap-frogged the Yankees, who suffered similar injuries to what we might have expected and didn’t receive enough from everyone else to compensate. The Yankees head into 2016 having to decide if it wants to spend big in what could be a deep winter class, or move some more pieces around to continue to try to get younger, more athletic and integrate a suddenly blossoming farm system. The Sox or Blue Jays took a big step forward and won 89-91 games (the Yankees settled at 87 wins) and battled for the last wildcard slot. The other won 85 games and gave Yankees’ fans a scare once the games stopped mattering.

It’s dark times in the Yankees’ Universe. Tanaka didn’t even survive the spring before season ending surgery, Teixeira, Sabathia and A-Rod are officially finished, and it was too little, too late, when Rob Refsnyder and Jose Pirela tried to fill the enormous offensive holes in the middle of the diamond. Chase Headley regressed back to his Padres’ days and Betances was only OK as a closer, blowing some important divisional games down the stretch. The Red Sox, Blue Jays and Orioles all had better luck with injuries and all handled the Yankees head to head while beating up on the Rays.

Though there was no more Joe Maddon, the Yankees struggled with the 93 loss Rays anyway en route to an 80-82 record. Joe Girardi is officially on the hot seat heading into next season and there’s rumors Hank Steinbrenner gets more say in personnel if Brian Cashman doesn’t clean this mess up with one more chance. Should the Yankees not find a healthy rotation and a middle of the order soon, 2016 might get even worse.

It’s officially Rangers’ country in New York and we’ve started to see a few more Mets hats in the area, and not just because Matt Harvey is healthy again. Tanaka didn’t make it through the spring, the older guys didn’t contribute, Headley and Ellsbury reverted back to an injury-prone past, McCann was more April than September, Ivan Nova never did quite make it back, Eovaldi looks like a bust because he never developed a third pitch and the Yankees ended up paying those $6 million dollars to A-Rod when he hit his sixth home run….In early August right before the Yankees realized the season was over even though they were 10 games under .500.

In this scenario, the Yankees still have to hope Tanaka and Nova can make an impact in 2016, they still don’t know what the deal is with Eovaldi, they miss Robertson in the ninth, and they officially have to wait another year before they can begin to dump more than 75 million dollars dedicated to: Tex, Sabathia, Beltran and Rodriguez, all of whom are completely dead weight.

At 69-93, the Yankees sell 2% of ownership to Derek Jeter just to keep fans from rioting.