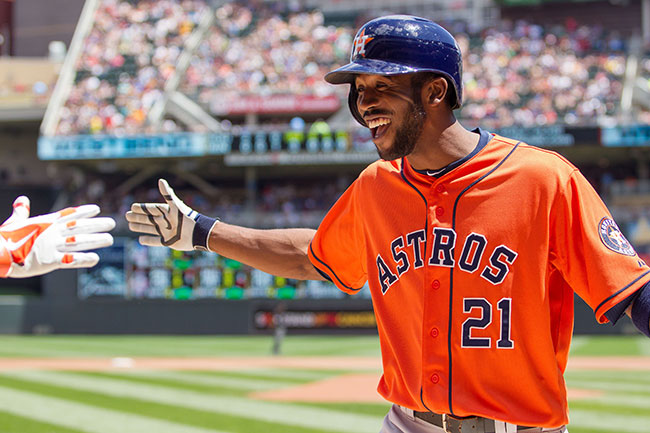 The Chicago Cubs acquired outfielder Dexter Fowler from the Houston Astros in exchange for infielder Luis Valbuena and pitcher Dan Straily. The Cubs dealt away some of their infield surplus to upgrade their outfielder. Meanwhile, the Astros got a new third baseman and some depth for their rotation.

The 28 year-old Fowler hit .276/.375/.399 in his first season with the Astros after being traded from the Colorado Rockies. His defensive numbers, while historically below average, were particularly poor in 2014. Still, he’s relatively young, and his typically high on-base percentage transferred over from the offense-friendly environment of Coors Field.

Fowler is in his final season of arbitration eligibility, and should command around $10 million. He’ll join an outfield group that features Jorge Soler, Chris Coghlan, Chris Denorfia and Arismendy Alcantara. The latter struggled in his first big league season, and could start in the minors. Alcantara also possesses the versatility to man an infield position.

The 29 year-old Valbuena posted a solid batting line of .249/.341/.435 in 2014 while playing third and second. But, with the Cubs wealth of young infield talent, he became expendable. Matt Dominguez, who handled the hot corner for the Astros last year, hit a miserable .215/.256/.330. Valbuena should provide a significant upgrade. He’ll make $4.2 million in 2015 and will be eligible for arbitration for the final time next winter.

After Chicago added Jon Lester and Jason Hammel this offseason, Straily was no longer needed. For Houston the right-hander will likely provide depth to a rotation that features two solid starters in Dallas Keuchel and Collin McHugh but not much else. Brad Peacock could miss the start of the year with a hip injury, which could give Straily a chance to start. The 26 year-old had a poor 2014 campaign, as he posted a 6.75 ERA over 52 big league innings and spent most of the year in Triple-A. However, he had a good year with the Oakland Athletics in 2013 and has five years of team control remaining with a minor league option.

The Astros offseason has been focused on improving their 2015 product after they went 70-92 in 2014. They’ve added Luke Gregerson, Pat Neshek and Jed Lowrie in free agency and Evan Gattis via trade. Jake Marisnick, who they acquired from the Miami Marlins last season, could take over in center, and George Springer may be an option as well.

Chicago is focused on 2015 as well. With the addition of Lester, their rotation looks solid, and several of their exciting prospects could be ready to contribute this year. Adding Fowler improves their outfield and opens up room in the infield for the young guns.