Red Sox Should Stay the Course With Jackie Bradley Jr. 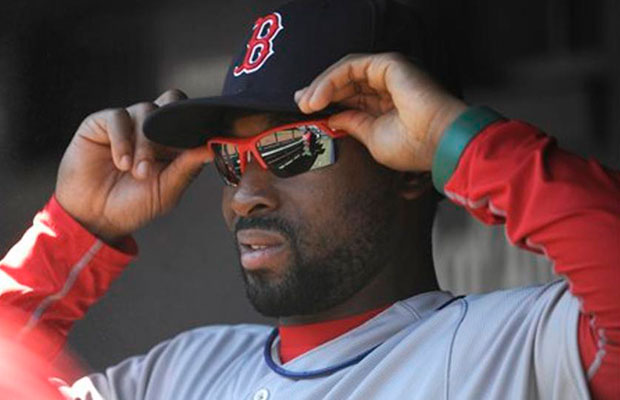 In Major League Baseball, producing difference-making young players is crucial to building an annual contender. Even the big market teams cannot fill every position with premium names carrying salaries north of $20 million a year. Typically, the cornerstones to any team that advances deep into October are prospects who develop into All-Star caliber performers or fill valuable roles in the lineup, rotation or bullpen.

Boston Red Sox General Manager Ben Cherington understands all of the above. It is why, even after the club struggled through a 2014 campaign that saw it finish in the American League East basement, he has not panicked this offseason and emptied the well-stocked vault of Boston Red Sox prospects for costly veterans to upgrade roster deficiencies. Instead, he signed Pablo Sandoval and Hanley Ramirez to bolster the offense, and constructed a stable rotation by inking Justin Masterson to a one-year deal and acquiring 28-year-old left-hander Wade Miley and 26-year-old right-hander Rick Porcello, pitchers whose best years are ahead.

With the debut of spring training around a month away, the Red Sox are reportedly in the mix for Cole Hamels, and they could be interested in fellow Phillies left-hander Cliff Lee. Trading for either arm would require Cherington to dip into his stash of high-ceiling prospects, like Mookie Betts, Blake Swihart and/or Henry Owens. A story that is mentioned less frequently is the prospective trade of another intriguing young player with tremendous upside – Jackie Bradley Jr.

A supplemental first round pick (40th overall) out of the University of South Carolina in 2011, Bradley rapidly climbed the Red Sox farm system. In five minor league stops over four seasons, he has batted .290 with a .394 on-base percentage and an .850 OPS with 190 strikeouts in 1,058 plate appearances. His performance during spring training in 2013 was so dazzling that he was unexpectedly placed on the Opening Day roster, making his Major League debut before setting foot in Triple-A Pawtucket.

Now 24 – he turns 25 in April – Bradley was No. 31 on Baseball America’s Top 100 Prospects List before the 2013 season and was still No. 50 before the 2014 campaign. A superb defensive outfielder with a strong and accurate arm, he was a Gold Glove contender last fall, yet his atrocious numbers at the plate have caused his star to dim.

In a forgettable 2014 season, Bradley batted .198 with a .265 on-base percentage, a .266 slugging percentage and a .531 OPS over 423 plate appearances. Known for his sage plate discipline in the minors, the left-handed hitter struck out 121 times compared to 31 walks. Including his 37-game stint with Boston in 2013 when he recorded a .189 average in 107 plate appearances, Bradley’s Major League statline is this:

With those numbers, Bradley’s attention-grabbing defensive skills alone cannot warrant a spot on the Major League roster, even as a fourth or fifth outfielder. Last year, Bradley was part of a Red Sox outfield that combined for just 26 home runs, a .249 average and a .669 OPS with only 33 stolen bases. No wonder the team spiraled from winning a World Series to finishing in the AL East cellar.

One of Cherington’s highest priorities this offseason was rebuilding the outfield. Ramirez, who has spent most of his career at shortstop, is expected to have enough athleticism to manage left field. Castillo is an above average center fielder while the 22-year-old Betts (who hit .291 with a .368 on-base percentage, a .444 slugging percentage, a .812 OPS, five home runs, 12 doubles and seven stolen bases in 52 games and 213 plate appearances) is a second baseman who showed flashes of defensive brilliance in the outfield last year.

Even after shipping Yoenis Cespedes to Detroit for Porcello, the Red Sox have a glut of outfielders. Veteran Shane Victorino, who is recovering from off-season back surgery and is owed $13 million in 2014, is expected to see time in right field and center field. The roster also features Allen Craig, Daniel Nava and Bradley along with the projected starting trio of Ramirez, Castillo and Betts.

Craig, who scuffled last year between St. Louis and Boston while hampered by a foot injury, has enough offensive upside to justify keeping him, though he could be traded for a reliever. Nava is a proficient yet unspectacular left-handed hitter on a club that is right-handed heavy. The left-handed hitting Bradley would have substantial trade appeal, if his major league hitting numbers were more reflective of his minor league stats.

If the Red Sox give up on Bradley now, they will be selling at a rock-bottom price. In a deal for Hamels or Lee, he would be a throw-in instead of a premium chip, and that might be a move that the Red Sox would long regret. In today’s game – where executives, media members and fans alike are immersed in sabermetrics; and top prospects are household names because of the array of exceptional baseball websites, and the MLB Network – promising young players lose their luster in the eyes of fans and the media if they have a down season in the majors.

The Red Sox believe that Bogaerts – who is still just 22 and muddled through a 2014 season that saw him bat .240 with 12 home runs, 46 RBI, a .296 on-base percentage and a .660 OPS – will emerge as a potent middle of the order bat with 30-100 potential for the long term. This is why he is a “thanks for asking, but no thanks to the offer” name in trade talks with Cherington. The same response is uttered when clubs inquire about Betts. Bogaerts and Betts can be dramatic difference makers in Boston’s lineup for several seasons. So can Bradley.

The Tampa Bay Rays could swiftly regret dealing Myers, just like the Minnesota Twins likely wish they would have retained Carlos Gomez, whose early Major League story is similar to that of Bradley. Gomez was Baseball America’s No. 52 prospect entering the 2008 season. An elite defensive outfielder who made his Major League debut with the New York Mets in 2007, he was part of the prospect package sent to Minnesota in the Johan Santana trade. Over his first three major league seasons, Gomez hit .246 with a .638 OPS. He whiffed 142 times in 614 plate appearances in 2008.

After he batted .229 with a .629 OPS in 2009, the Twins dealt Gomez to Milwaukee for shortstop J.J. Hardy. Over the last two years, Gomez has won a Gold Glove, earned two All-Star appearances and produced MVP-caliber numbers.

Bradley has similar upside. Though Ramirez, Castillo and Betts expect to be with the Red Sox for the long term, the club does not have an abundance of exciting outfield prospects. Manuel Margot, who is 20 and will likely open the 2015 campaign at advanced Single-A Salem, is rated as Boston’s No. 3 prospect, according to SoxProspects.com. He is an athletic and graceful outfielder who could be the Red Sox leadoff hitter as early as 2017 or 2018.

Bradley can assume that title sooner, as long as Cherington does not ship him to another destination. Better to hold onto him and see how he develops instead of selling low and watching him flourish in Philadelphia or even worse, another American League club.