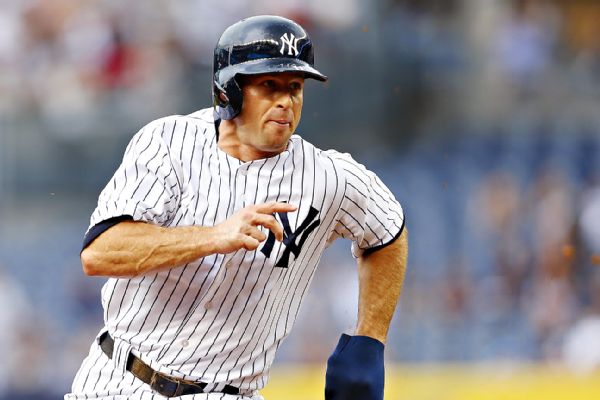 Finishing 2014 with an 84-78 record meant a distant second place in the American League East for the Yankees. It also meant four games back from playing in a one game playoff which produced a team who would finish two runs from a World Series title. While four games is surely not a death sentence, New York would have to pass a minimum of three teams this season to make it happen and hold back the Toronto Blue Jays, who finished one game worse.

All of that is said, without the possibility of a team like the Boston Red Sox, owners of dropping the most money on a middle of the lineup, from having a huge turnaround and being in the thick of the playoff race this season as well.

So have the Yankees improved from Opening day last season to the present? Let’s review the roster from last April to the end of the year to now and see where the improvements and needs have taken place:

Nothing new to report except the possibility of McCann himself, having a different season. Brian McCann will be 31-years-old this season, still young enough to put up similar career numbers to his prime. The upside is McCann was healthier in 2014 than he was since 2010 and he finished the season on a positive note. The downside is he finished the season with a .232/.286 split and the lowest OPS of his career. The stadium has helped plenty of hitters over the years, but it has also changed some (Mark Teixeira and Curtis Granderson come to mind). Still, a year adjusted to the AL and New York in particular and perhaps McCann finds his way on base more and can produce like his final season in Atlanta, or something closer to .256/.336 and an OPS nearly 100 points higher.

Another year older and no reason to believe Teixeira is going to find some sort of elixir to cut down on 109 strikeouts or improve upon a .216/.313/.711 line. “Tex” is what he is at this point and that’s a dwindling, no longer complete hitter turned to an all or nothing 20+ HR bat. It’s not the worst situation to be in in a power-hungry league, but it’s not pretty either. Perhaps, Garrett Jones, provides stronger depth behind him in the 40+ games he will almost certainly have to start.

Second Base is perhaps the biggest wildcard in terms of the Yankees’ offensive success this year. We can say with certainty it’s better than a year ago because we know how Brian Roberts turned out. We can also determine with pretty fair certainty Stephen Drew cannot be worse than he was last season (he will have a full season). The Yankees lost Martin Prado in obtaining Nathan Eovaldi and Prado certainly made an impact, but for only two months of the season.

The other wildcard is Rob Refsnyder and Jose Pirela are both MLB ready with one likely on the roster by Opening Day, whereas a year ago they weren’t viable options. This is an area where the floor is higher and the ceilings aren’t really comparable. Still, two months of a hot-hitting Prado compared to a full season of three legitimate options? I’ll take the upside.

It’s important to point out Yangervis Solarte actually played the most games at third base last season (65) even though he didn’t start or finish the year. Between Solarte and Johnson, there were a couple of months of success before Solarte crashed down to earth and eventually was traded out of the system altogether. He gave the Yankees 252 at bats at a .254/.340 clip with six home runs and solid defense. While not bad, the Yankees are in a better position with a full season of Chase Headley. Headley, in 224 at bats, gave the Yankees a .262/.371 split with six home runs himself and figures to perform more of the same even as he turns 31-years-old in May. We won’t get into the depth at third base this season quite yet, but suffice it to say it’s more interesting than Johnson or Solarte. A full season of a known quantity is better than mixing and matching.

And here is one of the biggest changes to the offense, mainly because of the defense. Last season, if nothing else, was one giant celebration of Derek Jeter. Outside of signing Masahiro Tanaka, it was more or less the only newsworthy thing the Yankees accomplished. Derek Jeter is a first-ballot Hall-of-Famer and once the Yankees were pretty much out of it, he came on strong to finish the season with a .256/.304 line and a .617 OPS, which was nearly 100 pts lower than his next closest “complete” season. It wasn’t the Jeter we’re used to and he played some of the worst defense at the most vital infield position we’ve ever seen.

Now let’s be fair; Gregorius probably isn’t going to improve on Jeter’s offense dramatically. In his only full season, Gregorius posted a: .252/.332/.653 season (2013) or very similar to Jeter’s 2014 campaign. If you’re looking for silver lining after some regression in 2014, it’s that Gregorius is still turning only 25-years-old and even reverting to 2013 numbers would be a marginal improvement and more importantly not a regression.

Here’s the big difference: Gregorius has a much  better chance of staying healthy over the course of a season in 2015 than Jeter and his defense is in another universe. His defensive WAR is a full 9.2 better than Jeter’s last season and he is said to have some of the best range in Baseball, which will be a nice surprise to watch for Yankees’ fans. Take Didi’s youth, defensive ability and offensive upside over Jeter’s twilight season.

Nothing to see here. It would be silly to think Carlos Beltran, formerly injury prone and now another year older, is going to revert to his Cardinals’ days. It’s also silly to think Ellsbury or Gardner will have dramatically different seasons. Still, this was mainly a bright spot for New York to begin with and now a full year of Chris Young, Garett Jones and Jose Pirela to chip in should at least mean better built-in depth for Beltran’s annual injury. There’s no change here and there didn’t need to be.

Another important note: Carlos Beltran ended up playing the most games at DH last season (76) and will likely have his fair share this season as well. Soriano was abysmal and didn’t survive through the season let alone half of it (67 games). Personally, it feels better to know Carlos Beltran and Alex Rodriguez will take up the majority of turns at DH instead of the 40 games shared between Soriano and Jeter, but this is a really unpredictable spot in the lineup. It could be great (A-Rod staying healthier and only concentrating on hitting) or it could be a disaster ($40 million+ dedicated to two injury-prone and aged players who may have evaporating bats).  Still, Rodriguez, no matter what he is at this point, has to be a better bat than what Soriano was and for that we will be thankful.

A lot to dissect here. The biggest downside is Hiroki Kuroda is officially not coming back. He’s the only starter who pitched a full season, coming just short of 200 innings last year. Sabathia is still a cog in the rotation but with expectations officially as a third starter. Technically, Tanaka finished the season but we won’t count the final two starts after his injury. He will be relied upon as the ace after his dominant showing last season, but the dark cloud of potential injury will surround him every start.

Pineda was brilliant, then predictably hurt, then brilliant again. Greene and McCarthy, who were both consistent and successful, are gone. Capuano was depth at the end of the season and will be depth again to start this season and Eovaldi is now in the fold.

The loss of Kuroda and the injury concerns of Tanaka (and for that matter, Pineda and Sabathia) are major downgrades. Sabathia and Pineda’s health has now become habitual and Tanaka’s is a new discovery. New York has Eovaldi, who should be a 200 inning contributor, is in his prime and has a much higher ceiling than he has previously shown. Health is going to decide everything about the Yankees’ 2015 campaign on offense and in the rotation, but it’s particularly concerning heading into the regular season than it will be at the end of it, when we know each pitcher’s fate and see how Ivan Nova returns. The upside is much higher than a year ago: Nova should be fully recovered sometime in May, Sabathia will presumably improve upon a career worst third of a year, Tanaka and Pineda have emerged as front of the rotation arms rather than unknown and Eovaldi figures to be a starter on the rise with a big fastball.

All of that said, there are just too many things to be uncomfortable with and it’s impossible to say, right now, the Yankees are in better shape in the rotation now than they were at the end of last season. This could easily change throughout the year, but for right now, it can’t.

A lot of names change hands throughout the year so I included the biggest difference throughout the season. Going into 2014, Robertson was closing in his first season, Betances might have figured into the later innings and guys like: Shawn Kelley, Matt Thorton and Adam Warren were looking to be potential setup men.

Now, Robertson is gone but the even more dominant, Betances, figures to take his place in his first full season. Thornton is gone replaced by Andrew Miller, who was even more dominant last season. Kelley is gone, replaced by David Carpenter via Atlanta, who figures to be an improvement, especially since Kelley was hurt for part of last season. Warren and company are still there and will provide depth. At worst, the Yankees should have another strong bullpen, at best they should have a top three bullpen in MLB with a three-headed, hard-throwing, monster at the end of it.

The Yankees have certainly upgraded its roster both in terms of depth, age and talent this winter. It was a step in the right direction (and still ongoing) as well as a shift in philosophy. This doesn’t make the Yankees World Series contenders nor does it punch their ticket into playing deep into October, but it does set up the franchise much better in the future. The offense is likely to be improved but it’s still missing the hole Robinson Cano filled at the end of 2013. The bullpen will continue to be a strength.

The defense is much improved in the infield (from subpar to elite). The main issue with this team right now is in the rotation. There are too many question marks in terms of health (Sabathia, Tanaka, Pineda, Nova) and performance (Eovaldi, Capuano) and not enough certainties (Kuroda and McCarthy are gone).

The ceiling is this team will be back in the playoffs and give the Baltimore Orioles a run in the east, the downside is another 80-something winner with an eye towards 2016 and a clearer vision of who to rely upon and who to avoid for contributions in the future.