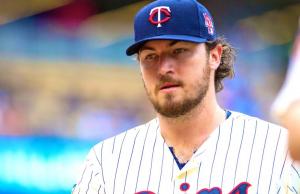 has signed a contract extension with the Minnesota Twins. The deal adds three years and $42 million to his current contract. Last offseason the Twins inked Hughes to a three year deal worth $24 million. He rewarded them with his best major league season. Now the 28 year-old hurler is under contract through 2019. Hughes will also get limited no-trade protection and a $200K bonus for each season in which he pitches at least 200 innings.

Once a top prospect with the New York Yankees, Hughes endured his fair share of ups and downs in the Bronx. He had a strong year in the Yankees rotation in 2010, and then suffered with injuries the next season and posted a 5.79 ERA, Hughes bounced back slightly in 2013, but had another rough year in 2014, as he pitched to an ERA above 5.00 and lost his starting role towards the end of the season. However, the Twins decided to take a gamble on his relative youth and upside by offering him three guaranteed seasons last winter.

Hughes blossomed in Minnesota, throwing a career-high 209.2 innings and authoring a 3.52 ERA. While the ERA was solid, his underlying numbers were even more impressive. He produced strikeout and walk rates of 21.8 percent and 1.9 percent, respectively. His strikeout to walk ratio of 11.6 to 1 was the best in major league history. Pitching in spacious Target Field helped Hughes as well. Only 6.2 percent of the flyballs hit off Hughes left the yard, a big decrease from the prior season.

After years of going back and forth between the cutter and slider, Hughes appears to have settled on the cutter. He posted a career-best zone rate and first-pitch strike rate, as well as his highest chase rate. The more pitcher-friendly confines of Target Field allowed Hughes to attack the zone with more confidence than at cozy Yankee Stadium. As a right-handed flyball pitcher, Hughes was a poor fit for Yankee Stadium, and had drastic home and away splits as a member of the Yankees. Looking to 2015 Steamer projects a 3.91 ERA for Hughes over 192 innings, which would grade out as slightly above-average.

The Twins clearly view Hughes as a fixture in their rotation. Along with the newly acquired Ervin Santana he will make up the frontline of the Twins rotation. It’s been a lengthy rebuild for Minnesota, but the Twins front office wants Phil Hughes to be part of it. In exchange, Hughes will earn $66 million from his age-27 to age-32 seasons. He’ll get another shot at free agency, where he could earn another substantial multi-year contract.