New York Yankees Making Trades to Contend in the Future 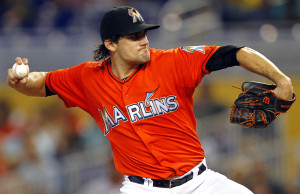 The trade at face value seems like a head-scratcher for New York. Phelps is a homegrown and proven commodity for pitching depth, Prado was arguably the best all-around hitter down the stretch and Eovaldi and Jones were nothing to write home about in 2014.

Make no mistake, this trade sent a few specific messages about the state of the Yankees: By shipping Prado away, it implies the Yankees will be giving a rookie a shot at second base (raise your hand if you remember the last middle infielder the Yankees actually let try to start his rookie season), will completely limit Alex Rodriguez to the DH position, and will take the Yankees out of the high-end pitching market. They don’t send a versatile player with multiple years of control like Prado away and then spend big on a free agent to fill the same hole they’re filling with this deal.

Brian Cashman seems to have a very clear goal in mind; acquire young pitching, and on that front he has accomplished that. Eovaldi had a 4.47 ERA and lead the NL in hits surrendered, but he is also only now 24-years-old, has three years of control left and throws in the upper 90’s. He’s essentially a younger Michael Pineda. Pineda, much criticized for not having better secondary stuff, having a big fastball and diminishing velocity in his rookie season, is another young pitcher the Yankees have under control. Those two will join Masahiro Tanaka and Ivan Nova and all of a sudden the Yankees have four starters who can throw into the mid 90’s in the middle of their primes or heading into it.

In other words, the Yankees are concentrating on the future, and not just 2015 in this case.

Joining them will be Chris Capuano, CC Sabathia (now all of a sudden soft throwing and old comparatively) and MLB ready depth in Brian Mitchell and Manny Banuelos. These eight names made Phelps completely expendable and despite being a homegrown pitcher, nothing more than a trade piece. Mitchell could take over Phelps’ role on Opening Day and the Yankees wouldn’t miss a beat.

So really this comes down to trading a versatile, gritty, 31-year-old who had a great couple of months in the Bronx for a young starter and a younger starting pitching prospect in German, another pitcher who throws into the mid 90’s and has a high ceiling. With Jose Pirela essentially a younger and less-proven Prado, this deal has a pretty clear silver lining. The Yankees have likely given Pirela and potential opening day second baseman, Rob Refsnyder keys to roster spots.

This off-season is exactly what Yankees’ fans wanted and naysayers feared and yet each trade has been criticized every step of the way.

All of a sudden, the Yankees have players in their prime starting at third base, shortstop, catcher, left and center-field with a potential rookie at second base and a young and versatile bench. They have limited A-Rod to a DH role he should have been in years ago and with Chris Young, Pirela and Jones under contract in 2015, have ample insurance policies for Carlos Beltran should he go the injury route again.

Meanwhile, in the rotation the Yankees offer four starters who throw hard and are on the right side of 30-years-old with Sabathia’s role quickly diminishing in terms of importance. In the bullpen, they replaced David Robertson with Andrew Miller and will likely give Dellin Betances the role he was called up for eventually, to close for the team.

Now all of a sudden the designated hitter and one position player along with one starter (unless Hiroki Kuroda returns and when Nova is healthy) are all in their primes. The Yankees have gotten younger, defensively superior and look to have another solid bullpen.

Without a true middle of the order bat, New York will still continue to struggle driving in runs but even that took a shot in the arm with Didi Gregorious’ defense and limited offensive ability still likely to eclipse a retired Derek Jeter‘s final season, Chase Headley here for a full season and A-Rod returning and likely to out-produce a washed-up, Alfonso Soriano.

This team will go as far as its health as usual but this year nobody will be able to say the team is old or un-athletic or that the rotation doesn’t at least have the potential to be lethal if it can stay healthy.

If you are willing to concede that and not get too torn up about a player headed out of his prime (Prado), an easily replaceable reliever (Phelps) and a promising but unproven young starter without a good minor league track record (Shawn Greene) no longer being on the team, than you have to admit this off-season has taken a distinct and different turn in terms of the Yankees’ future outlook.

Imagine what will happen if guys like Greg Byrd or Aaron Judge reach the bigs in the next couple of years and bring power as advertised?

Or furthermore, with every position under contract already in 2016, imagine what happens next off-season when the Yankees have the pieces and only have to spend money on improving them?