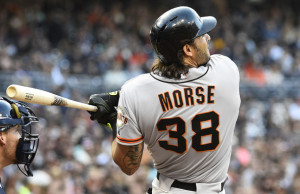 The Miami Marlins have signed Michael Morse to a two year deal worth $12 million reports Barry Jackson of the Miami Herald. Morse, 32, could slot into first base with the Marlins, either as a platoon partner with Garrett Jones or in a full-time role. A $12 million price tag seems attractive after seeing designated hitters Billy Butler and Kendrys Morales garner $30 million and $18 million, respectively.

After an injury-marred 2013 campaign where he hit a miserable .215/.270/.381, Morse signed a one year, $6 million deal with the San Francisco Giants. His 2014 campaign was much more respectable, as Morse hit .279/.336/.475 while playing half his games in the offensively-challenged environment that is AT&T Park. He carried a solid line against right-handers as well.

Morse’s defensive deficiencies are well-documented. Since 2011 he’s graded out as one of the worst defensive players in baseball. The Marlins appear to be intent on limiting his playing time to first base, which will prevent him from doing too much damage with the glove. Injuries have hampered Morse for much of his career, so perhaps a move to first base will be good for his health.

Morse doesn’t offer much as an all-around player. He’s a bat-first guy in every sense of the term. If he’s healthy, he should be able to provide some punch to the Marlins lineup as a first baseman or pinch hitter. Steamer projects a batting line of .259/.312/.444 with 16 home runs in 97 games. His defensive projection is miserable, but with a full offseason to get acclimated to first base and less time in the outfield, he may be able to cut it.

The Marlins have engaged in a series of moves this offseason with the hopes of contending for a playoff spot in a division that, with the exception of the Nationals, appears to be quite weak. Earlier in the offseason they signed Giancarlo Stanton to a huge extension, and since then they have traded for Dee Gordon and Mat Latos. Morse doesn’t move the needle very far in their favor, but signing him helps them upgrade a very weak first base position.

Pulse Biosciences, Inc. Expected to Announce Earnings of -$0.54 Per Share