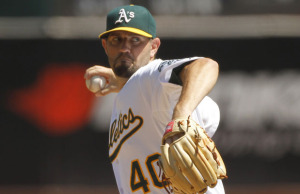 The Chicago Cubs have reached an agreement with right-hander Jason Hammel on a two-year deal for $18 million that includes an option year.

Overall, he was 10-11 with a 3.47 ERA. Hammel played for new Cubs manager Joe Maddon on the 2008 Tampa Bay Rays team, so certainly there is some familiarity with Hammel there as well.

Hammel was part of the deal that sent Jeff Samardzija to Oakland and brought Addison Russell and Billy McKinney to the Cubs organization.

The signing of Hammel solidifies the middle of the Cubs rotation but the team is still looking to add a front line starter where it be whether it be Jon Lester, Max Scherzer or James Shields and something may happen this week at the Winter Meeting in San Diego.

One player who is not likely to be moved in shortstop Starlin Castro. The Cubs informed the Mets, the Yankees and other teams that Castro won’t be going anywhere. Castro hit .292 with 14 home runs and 65 RBI in 2014.