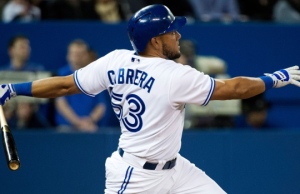 The market for free agent outfielder Melky Cabrera is heating up, with the Seattle Mariners reportedly leading the pack. Cabrera became a free agent after declining the qualifying offer extended to him by the Toronto Blue Jays. He’s looking to get four or five years and $55-65 million.

The 30 year old Cabrera played the last two seasons with the Blue Jays after he signed a two year $16 million commitment with them. Prior to that he had a career season with the San Francisco Giants, posting a .346/.390/.516 batting line. However, his season was shortened by a PED suspension.

In his first year with the Jays, Cabrera struggled mightily, and was limited to 88 games. Over that time he batted just .279/.322/.360 and hit only three home runs. A tumor in his spine hampered his play significantly, and 2013 ended up being his worst season since the woeful 2010 campaign with the Atlanta Braves.

Cabrera bounced back in 2014, slugging 16 home runs and batting a solid .301/.351/.458 and playing in 139 games. His outfield defense graded out poorly, and he’s best valued as a bat-first player. Overall though he mustered +2.6 fWAR, a nice rebound from the prior year.

Cabrera offers above-average pop with the bat, and consistently posts one of the lowest strikeout rates in the major leagues, which allows him to hit for a high average. He doesn’t provide much value on the bases or elsewhere, and he’s been hampered by injuries over the last two years. Looking to 2015, Steamer projects a batting line of .291/.340/.430, good for a 116 wRC+.

After signing Nelson Cruz to a four year deal, the Mariners could double down on free agents with draft pick compensation attached. Signing Cabrera would cost them a second round pick, whereas other teams would lost a first-rounder. Still, a four or five year commitment in the range of $15 million per year appears steep, especially for a player who projects for just under +2 fWAR in the first year of the deal.

It’s been a curious offseason for the Mariners, who recently sent outfielder Michael Saunders to the Jays for left-handed pitcher J.A. Happ. While Saunders has battled injury troubles, he’s two years younger than Cabrera. He’s making his second run through the arbitration process and accordingly is much cheaper. Steamer offers very similar projections for both players.

The Mariners are looking for an outfielder to replace the outfielder they just traded away. One thing is clear, a replacement for Saunders will be much more expensive. It’s less clear whether that replacement will be an upgrade.