Blue Jays All in After Acquiring Josh Donaldson from A’s 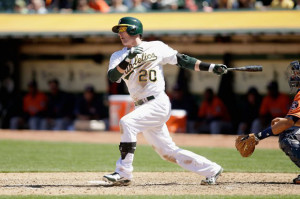 It’s been a busy offseason for the Jays, who signed catcher Russell Martin to a five year deal earlier. They’re serious about reaching the playoffs for the first time since 1993. Meanwhile, the A’s continue to retool their roster as they always seem to do under General Manager Billy Beane.

The 29 year-old Donaldson is one of the top players in baseball. Over the last two seasons, only Mike Trout and Andrew McCutchen have more WAR than the A’s third baseman. Furthermore, the Jays will own his rights for the next four seasons in which he’ll receive arbitration salaries.

He’s an excellent defender who has knocked 53 home runs in the last two years despite playing half his games in spacious Oakland Coliseum. Along with Jose Bautista and Edwin Encarnacion, he’ll provide pop to the middle of the Jays lineup. Steamer projects nearly +6 WAR for Donaldson in 2015, which would make him one of the top 5-10 players in baseball.

Lawrie, the major piece for the A’s, has had trouble staying on the field. He appeared in only 70 games last season, and has never played in more than 107. After a phenomenal 43 games debut stint in 2011 in which he hit .293/.380/.573, the 24 year-old has had difficulty meeting expectations. Like Donaldson, he’s a great defender, and his career offensive numbers have been above-average. Steamer is very high on Lawrie, as it projects a .263/.324/.425 batting line and +4 WAR.

The biggest question surrounding Lawrie is whether he can remain healthy. He hasn’t been able to do that thus far in his young career. If he does manage to play 130-140 games or more, this deal might look a lot better for the A’s. Lawrie is a good player who should have upside left.

Of the prospects received by the A’s, Barreto is the most promising. He’s only 18, but he possesses some impressive tools. Barreto runs well, and could stick at shortstop. Most importantly, his hitting ability has drawn raves. At 18, he’s a long way from a major league roster, but he’s handled low minors pitching with ease.

Graveman and Nolin each had cups of coffee with the Jays last season. Both are potential back-end starters, though the bullpen may be more likely. Historically, the A’s have done a good job getting value out of these types of pitchers, and their home park is very pitcher-friendly. Still, they have several rotation pieces, so it doesn’t appear that either one will get much time in the rotation this year.

Right now the return on Donaldson seems a little light for the A’s. He’s one of the top players in baseball, and though he’s nearing 30, he’ll get arbitration salaries for the next four years which should make him very affordable. Lawrie is talented but injury prone, and with the exception of the very young Barreto, none of the prospects has big upside. However, this appears to be just one of several moves the A’s will make. It’s best to reserve judgment till the conclusion of their offseason.