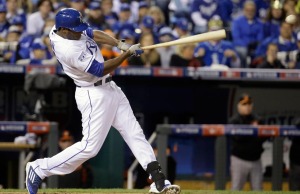 With a 2-1 victory on Tuesday night, the Kansas City Royals have taken a 3-0 series lead on the Baltimore Orioles. Seven games into the postseason, the Royals have yet to lose a game. Outfielder Lorenzo Cain has emerged as a star this postseason.

A former 17th round draft pick out of Tallahassee Community College, Cain was acquired from the Milwaukee Brewers in the Zack Greinke trade in the 2010 offseason.

That trade, which cost the Royals Greinke and Yuniesky Betancourt, also netted the Royals starting shortstop Alcides Escobar and Jake Odorizzi, who was a piece in the James Shields–Wade Davis trade. Cain spent most of the 2011 season at Triple-A, appearing in just six games for the big league club.

The speedy outfielder played in 61 games the next year, posting a respectable .266/.316/.419 batting line. More importantly, he flashed some of his phenomenal centerfield defense. Cain’s playing time increased to 115 games and 442 plate appearances in 2013. Though he managed to hit just .251/.310/.348, his sensational defense allowed him to produce 2.7 fWAR.

Cain has blossomed in 2014, his age-28 season. He’s put up career-highs in batting average and on-base percentage with a .301/.339/.412 line. Also, he’s swiped 28 bases while being caught just five times. Along with his excellent defensive play, he’s been worth 4.9 fWAR in only 502 plate appearances.

In his first taste of postseason play, Cain has impressed greatly. He collected two hits against the Oakland Athletics in the Wild Card game including a double that brought home two runs. While he managed only two singles in three games against the Los Angeles Angels, he made several diving catches to save runs.

The Royals have shocked the rest of baseball-watching America. They snuck into the playoffs via the Wild Card. During the regular season they hit the fewest home runs in the major leagues. Not a single player on the team hit 20 home runs, and just three reached double digits. Yet, after reaching the postseason for the first time since 1985, they are on the brink of hosting the World Series.

It’s been a fantastic postseason for the Royals. Lorenzo Cain’s exciting play has made him an emerging star this postseason. His speed and exciting outfield defense epitomize the Royals. He’s the easy favorite for the ALCS MVP should the Royals manage to close out the series.