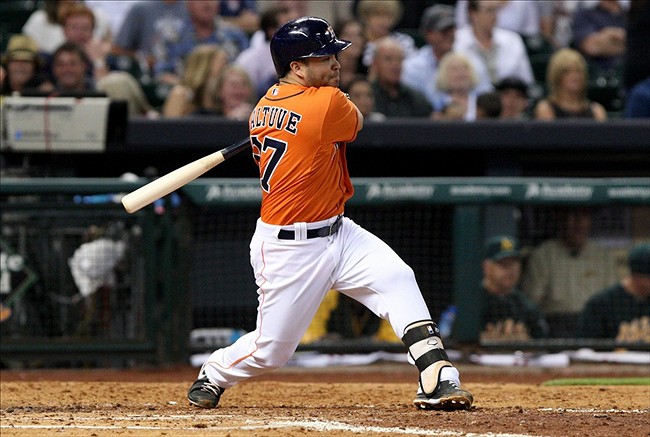 It’s been a season of controversy for the Houston Astros. They showed some real promise in June, with rookie right fielder George Springer making a big splash, and pitchers Dallas Keuchel and Collin McHugh posting ace-like numbers. However, shortly after Sports Illustrated declared them the “2017 World Series champs“, things began to unravel. Top prospect Carlos Correa was lost for the season with a broken ankle, and they failed to sign the top pick Brady Aiken, in what turned out to be a messy dispute.

In the midst of these issues, second baseman Jose Altuve is having a fantastic season. The undersized Altuve is leading the major leagues in batting average at .343 and hits with 221. He’s also stolen the most bases in the American League. It’s been a phenomenal season for Altuve, who is a fan favorite.

Altuve broke onto the scene in 2012 with a big first half. He posted a .303/.344/.438 slash line, and was named to the All-Star team for his efforts. The second half wasn’t as kind to Altuve, as his average dropped to .274, and his slugging percentage decreased to .351. Despite his All-Star status, he accumulated just 1.5 fWAR over the course of the year, due to poor defensive ratings at second base.

This season has been a career year for Altuve in every category. He’s ripped 46 doubles, and his .113 isolated slugging percentage is higher than players such as David Wright, J.J. Hardy and Billy Butler. While Altuve has always had a knack for putting the bat on the ball, he’s trimmed his strikeout rate all the way down to 7.7 percent, which is nearly five points lower than the previous year. Only Victor Martinez has a lower strikeout rate.

Furthermore, Altuve has 54 stolen bases in 63 attempts. His +6.7 base running runs is one of the top marks in the major leagues. Altuve’s defensive ratings are still subpar, but his offensive production has more than made up for his deficiencies on the other side of the ball. Overall he’s produced +5 fWAR, which puts him among the top 20 position players in baseball.

Altuve is under contract for the next three seasons for a total of $10.5 million, with team options for $6 million and $6.5 million for the 2018 and 2019 seasons. That’s a huge bargain, even if he performs closer to his 2012-13 levels. The second baseman is just 24 years of age. If the Astros young players develop as the organization hopes, Altuve will be a crucial piece on a contending team.