Astros Prospect Carlos Correa Will Miss the Rest of 2014 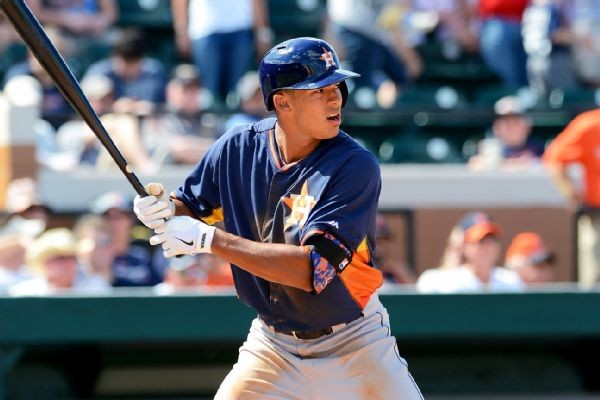 Houston Astros top prospect Carlos Correa will miss the remainder of 2014 after undergoing surgery Wednesday to repair a fracture of his fibula just above his right ankle, general manager Jeff Luhnow said.

The 19-year-old shortstop taken with the top pick in the 2012 First-Year Player Draft out of Puerto Rico in 2011, left a game on Saturday and was hurt while sliding into third base on an RBI triple playing for Class A Lancaster in Lake Elsinore, Calif.

“We’ll have to see how the rehab goes,” Luhnow said. “It’s obviously unfortunate. He’s one of our top young players in the game, losing this amount of time, but we are optimistic he’s going to return to 100 percent and will back on the field with us ready to keep doing what he’s doing.”

The team is hopeful Correa will be able to play in the Arizona Fall League or perhaps winter ball in November.

“I talked to him several times over the past few days and he’s taking it about as well as any young man can take it,” Luhnow said. “It’s the first time he’s been injured. He did a lot of research, we talked to several doctors. His parents are here supporting him and he went into this with a very good attitude. He’s determined to work as hard as he can on his rehab and get back as soon as he can.