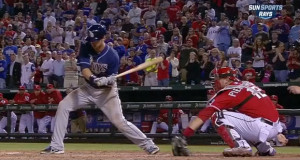 Tampa Bay Rays second baseman Ben Zobrist dislocated his thumb sliding head first into second base on a steal attempt in the top of the fifth against the Seattle Mariners today and will likely be head to the disabled list. Rays manager Joe Maddon said the team will using Sean Rodriguez and Logan Forsythe at 2B in Zobrist’s absence.

Durham infielder Cole Figueroa could also figure into the Rays plans.  The 26-year-old has a .299 average in 32 games at Durham this season. Over the last three seasons for the Bulls, he’s hitting .288. Figueroa would need to be added to Tampa Bay’s 40-man roster.